A petition signed by over 114,000 people was presented to the Canterbury Regional Council today calling on consents for two water bottling plants to be revoked, despite the organisers admitting the action was largely symbolic. 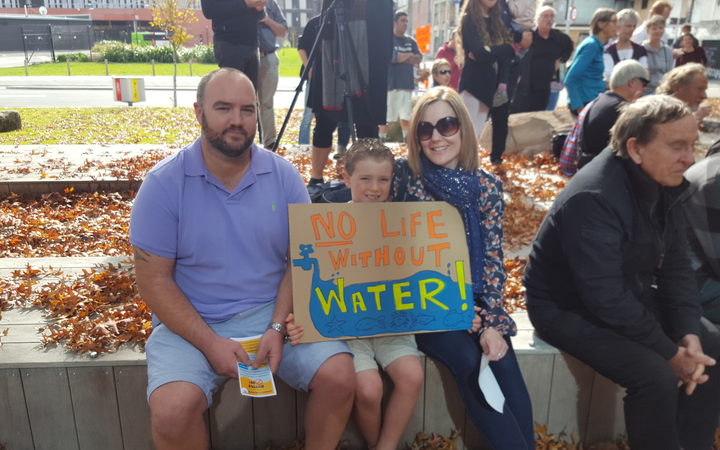 Bradley, Lachlan and Beth Tindall were among the people who turned up to see the petition get handed over the the Canterbury Regional Council. Photo: RNZ / Rachel Graham

The petition asked the regional council to cancel consents which give two companies permission to take up to 24 million litres of water each day.

The consents, for Cloud Ocean Water and Rapaki Natural Resources, were initially issued 20 years ago for industrial use of the water at wool scouring plants, and haven't been used in about a decade.

Genevieve Robinson said she initiated the petition because she was shocked that the council would roll over the consents.

"In my personal opinion I thinks it's a change of use. I don't believe that because you bought a bit of land off somebody that you have a right to use that. Yeah you've got a hole in your piece of land called a bore but it doesn't give you a right to what is underneath it."

Aotearoa Water Action spokesperson Peter Richardson said the council had not done a proper assessment to determine the impact of the permits.

"We don't think it's safe, we don't think it's sustainable. We don't believe they have done the assessment that would enable them to make such an assessment. We also believe their process by which they granted those consents was flawed and we want to hold them to account and make sure they follow proper process when dealing with something as precious as Christchurch's water supply."

Mr Richardson said ultimately they'd like to change the culture of the council, which he said was focused on economic benefits, not community benefits.

A crowd of about 50 supporters came to see the petition being handed over. Many were particularly annoyed that the water bottling plant was taking the unadulterated water, when they are being told the public supply must be chlorinated.

One of those was Kevin Dean, who said Christchurch had always prided itself on the quality of its water.

"It's all going down the gurgler. The cows have pristine acquifer-fed water and the bottlers take it overseas for zilch, and either we buy it off them or we have it with chlorine."

Bradley Tindall said he and his family attended because of concerns about the unresolved issues around the consents.

"It's a hell of a lot of water and it's going off free. There are so many uncertainties around water and the future for our children. What's it going to do in 10-20 years? Are we going to have enough water?"

Mr Richardson said he realised the council wouldn't overturn the consent just on the basis of the petition, so the group had also launched legal action against the granting of the consents.

He said that application was currently with the courts.

The petition was accepted by the deputy chair of the regional council, Peter Scott, who said the council now needed to allow the court action to run its course.

He also invited the petition organisers to make a deputation to the council on 10 May.