Two trampers from Kahurangi National Park have had a shock after bringing home what they thought was an empty shell of a giant land snail as a souvenir. 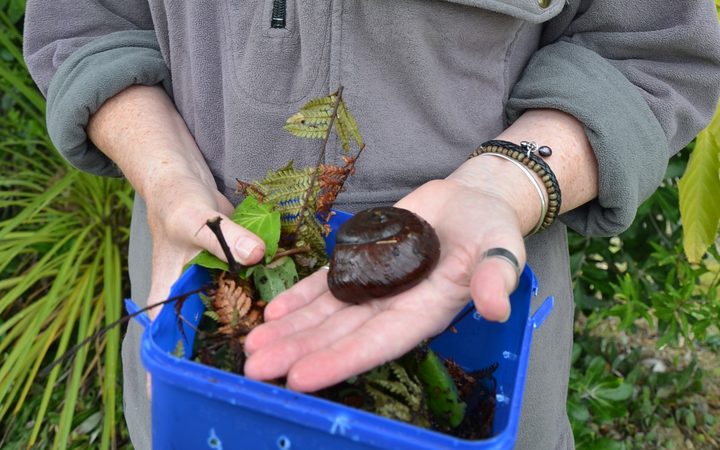 The endangered powelliphanta annectens, has been snail mailed home via courier service after the couple found they had snail smuggled a live specimen.

The snail is one of New Zealand's most threatened invertebrate and collecting empty shells or live snails is illegal under the Wildlife Act.

This snail had shell a diameter of about 65mm, but they can grow as big as 90mm.

However, the Department of Conservation has decided not to charge the couple, as they were unaware it was illegal to move empty shells and contacted DoC as soon as they noticed the mistake.

They made the discovery while they were making a stop-over in Wellington over the weekend and showed off the souvenir shell to their daughter.

"I felt so bad when I realized it was alive. My daughter gave me a good telling off and quite rightly so. I hardly slept that night!," said one of them.

DoC community ranger, Lee Barry said the couple did the right thing by calling DoC instead of releasing the snail.

"Snails are hermaphrodites, so just a single snail could lay eggs and create a new population which obviously would be not in its native habitat and could cause problems for other local invertebrates," she said.

Lee Barry said even taking shells is illegal, as they provide calcium to other snails in the environment.

There are more than 50 species and subspecies of giant land snails and they are vulnerable to becoming dinner to rats, possums, pigs and thrushes.

"They also live in really isolated populations, so wherever you lose snails from a particular area you can be losing a whole subspecies because the snails in another valley a couple of kms away could be a whole different subspecies," she said.

Ms Barry said the snail was dehydrated when it first arrived, but is now recovering.

"We shipped it overnight yesterday, it spent a night in the fridge here in Wellington and we packed it with some moss and a couple of earthworms as a snack and we've had word it's arrived back in Nelson," she said.