A pilot programme aimed at tackling domestic violence is unable to say how many victims and perpetrators have been helped. 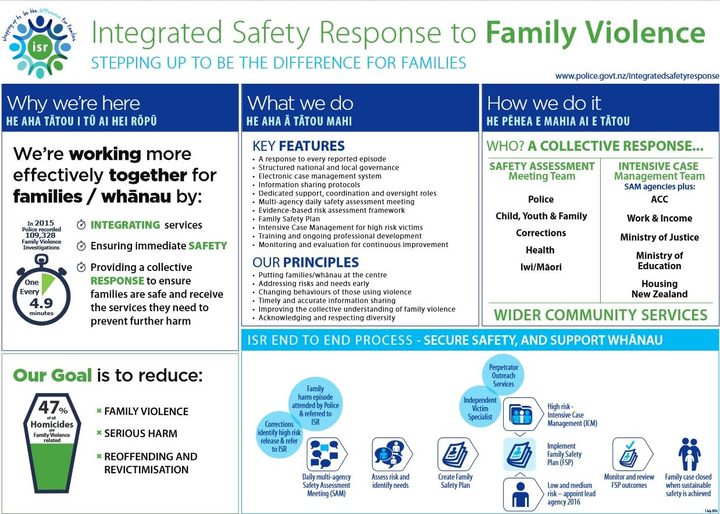 The police said Integrated Safety Response (ISR) was for the first time identifying gaps in services - but it was not funded to address them.

"The ISR pilot was set up as a crisis response and is identifying (for the first time) families' needs and where there are service gaps," police said in a statement.

The gaps the ISR found in services were mainly around perpetrators.

Launched under the previous government at a projected cost of $38 million, ISR is a three-year police-led programme that has been running in Waikato and Christchurch since 2016.

It works with individual families to ensure victims get the support they need to stay safe and perpetrators get the help they need to stop hurting their partners or children.

"Where needed, ISR refers family members and support services to address longer term needs such as mental health and substance abuse. ISR is not funded to address gaps with these wider and longer term services. However, any concerns with service gaps are escalated and discussed at the local governance level," police said.

Acting Superintendent Bronwyn Marshall said police were working with NGO providers on new contracts under which they're required to report their outcomes.

The pilot had showed promising results in terms of agencies working together, and the plan was to build on that," she said.

"What we are doing in the next two years is growing that so that we can get it evaluated. And we've got that evaluation being built now so that we end up with something at the end of the pilot which can hopefully inform a better way of doing things right across the country. Because, like I say, in other parts of the country we don't know this type of stuff."