A young Paeroa man who was made to scrub his tags from the old local skate-park is now being paid to paint a mural at the town's new skate park. 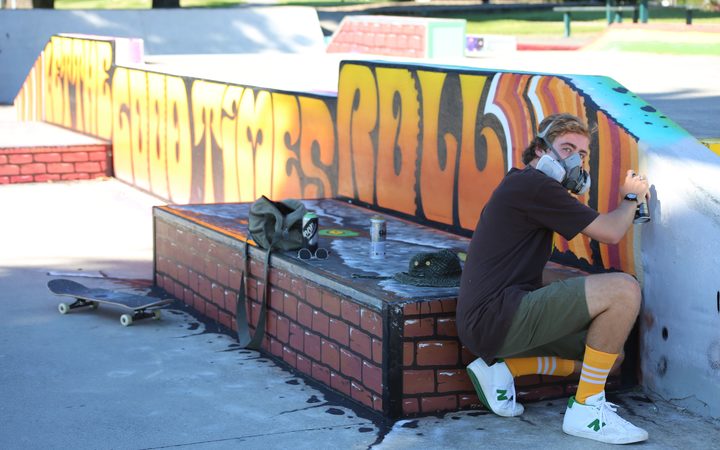 Street artist and house painter Reuben Levien's interest in art started when he was 12-years-old, he would mimic skate board brands in vivid on Paeroa's Norwood Street skate bowl after school.

He said it wasn't really tagging and was more like cartoon drawings, but he was always made to scrape them off.

"I practiced my artwork on everything from friend's cars to flat fridges, and set a goal to one day become good enough that people would cover the cost of the spray paint I used."

Mr Levien said the job had exceeded his goal and he was now inspired to promote his work more widely.

The mural, which is three quarters done, features everything from characters from The Simpsons to Levien's own designs.

"The kids have inspired a lot of the designs and they've chosen a couple of the cartoons. They run over when I arrive and help carry the paint," he said.

Paeroa Ward Chair Paul Milner said it was great to have such a bold and colourful piece of artwork to brighten up the well-used skate park.

"I've heard nothing but positive comments about his work."