Myrtle rust has spread to the South Island for the first time and government agencies are now giving up on trying to eradicate the disease. 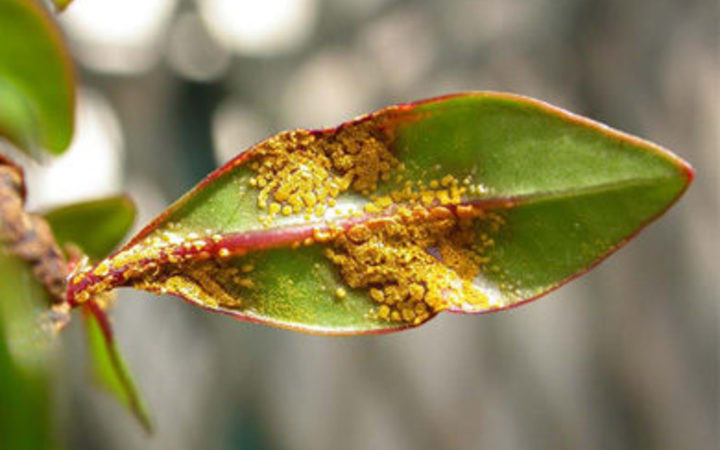 The Ministry for Primary Industries (MPI) and the Department of Conservation have confirmed the destructive plant disease has been found in the Tasman region at the top of the South Island, which means it is now established in almost all regions identified as vulnerable.

MPI's spokesperson for the Myrtle Rust Response programme, Dr Catherine Duthie, said when myrtle rust was first discovered on mainland New Zealand in May last year, officials warned it would be hard to eradicate.

"There has been an enormous operational effort over the last 11 months, but the windborne nature of the disease means that containment has not proved possible.

"We have signalled for a while the likely need to change gear from intensive surveillance and the removal and destruction of host plants, to one where we look to manage the disease over the long term."

The fungus has been found in the Tasman region on ramarama on a residential property in Collingwood in Golden Bay, and a commercial property at Pohara.

MPI also confirmed infections on five properties at Omori on the south-western edge of Lake Taupō, which was also a new region for infection.

"We now have well over 540 infected sites across the North Island and now the top of the South," said Dr Duthie. "Because of the windborne, pernicious nature of the disease, we have to anticipate that there are likely to be many more infected sites beyond these."

Efforts would now focus on a science programme to investigate ways to treat myrtle rust, boost resistance and susceptibility, and to improve seed banking collection, she said.

MPI and the Department of Conservation (DOC) would be holding hui in the coming months with iwi and hapu, territorial authorities, the plant and nursery industries, and communities to support the development of regional programmes, including surveillance and protection strategy for taonga plants and special locations.

"One of the most critical things is for people to continue to report suspected infections," Dr Duthie said.

"We need to keep tracking the spread of the disease so we can better understand how it might behave in New Zealand and what its long-term impacts might be. This will help us to understand resistance of native species and will be vital to our myrtle rust science programme."

MPI has commissioned a $3.4m research programme made up of more than 20 specific projects to be undertaken over the two years to June 2019, including an impact assessment by Lincoln University and a plant production biosecurity scheme for nurseries and garden centres to be developed by the New Zealand Plant Producers group.