Grandparents from around the country are joining priests, doctors, and scientists to protest at the annual oil and gas conference in Wellington, which starts today. 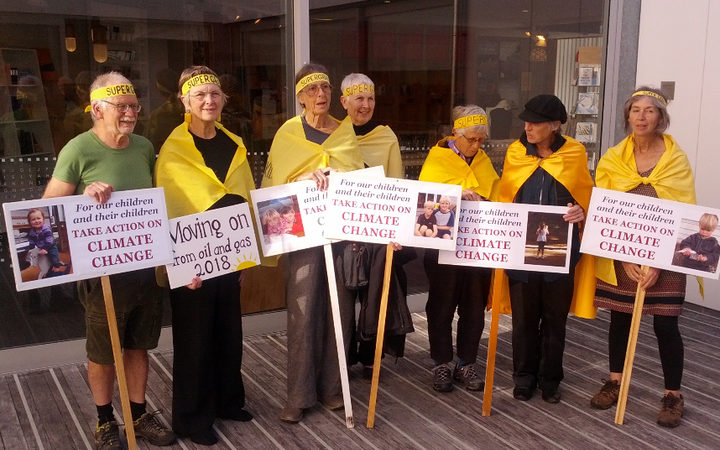 Supergrans have travelled from across New Zealand to protest at the New Zealand Petroleum Conference Photo: Supplied

Several dozen grandparents, dubbed the 'Supergrans' say they'll be joining protesters to show how determined they are to help the environment on behalf of future generations.

Group co-ordinator Joanna Santa Barbara, 74, said they recognised how unfair it was that their grandchildren are inheriting a warming planet.

"My generation has had a good time on fossil fuels and abundant energy and the costs will be paid by these young ones ... we want a good life for them."

Ms Santa Barbara said grandparents, who were mainly aged in their seventies but some were in their nineties, had travelled from across the North and South Islands to show their opposition to oil and gas exploration in New Zealand.

"We need to get across the message that the fossil fuel age is over and the oil and gas companies, they have to be prepared to phase out. They have to be starting to prepare for a non-fossil fuel energy age," she said.

The Anglican Diocese is also organising members to protest, along with doctors, scientists and environmental groups.

Protesters will be taking part in a march at Frank Kitts park after midday today, ahead of a blockade outside the conference at TSB Arena tomorrow morning.

Victoria University Climate scientist James Renwick will be among those protesting and said while New Zealand was very dependent on burning fossil fuels, it was something we needed to move away from - quickly.

"We can't just stop tomorrow and I'm not advocating that we just turn off the lights but we really need to move away as fast as we can.

"So the absolutely wrong thing to do is to prospect for more - maybe we use up some of the reserves we have but we put more energy into developing renewable sources rather than spending money looking around for old technology like gas and oil," he said.

Around 500 people are in the capital to attend the three-day event, when the government usually announces its block offer for oil and gas exploration.

But last week Prime Minister Jacinda Ardern confirmed she was "actively considering" the future of oil exploration - and that might mean no new permits are offered.

"It would be very detrimental to our national economy, the sector contributes a couple of billion dollars a year, 270,000 people are connected directly to the gas network in New Zealand, a good chunk of our fertiliser is made with gas, 3.6 million New Zealanders drive cars, so there are major implications at stake here," he said.

Energy Minister Megan Woods is due to speak at the conference and Mr Madgwick said the industry would be looking to her for more clarification of the government's position on block offers for oil and gas exploration.