Another group is claiming to have been spied on by the security firm Thompson and Clark.

As well as being paid by the government to spy on Greenpeace and at least one earthquake claimant in Christchurch, it can now be revealed it has also been monitoring three activist groups, including Oil Free Wellington. 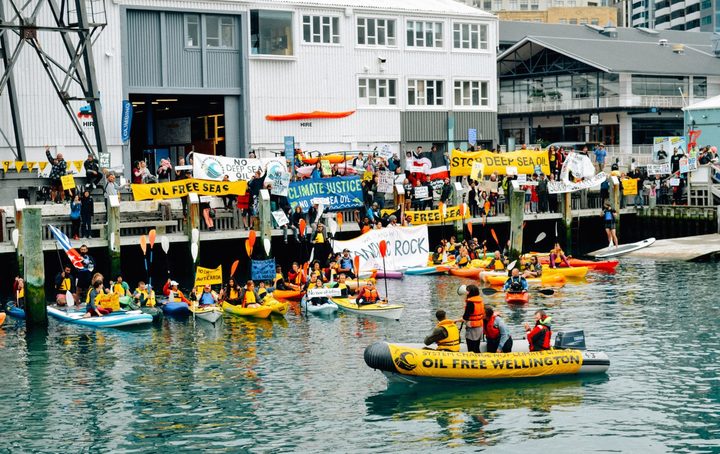 Oil Free Wellington found out it was being watched by Thompson and Clark when it made an official information request for emails from the firm to MBIE, the government department with oversight of oil and gas exploration and mining.

One of the group's members, Frances Mountier, said while the exact nature of the security firm's relationship with MBIE was not revealed in the documents, the fact they had a very close working relationship was.

"There are also regular meetings."

MBIE has admitted to using the firm for security advice on how to deal with protesters at a 2013 Petroleum Conference, but maintains this was the last time it hired them.

The emails released to Oil Free Wellington under the Official Information Act show Thompson and Clark continued after 2013 to provide MBIE with briefings about protest activity the group was engaging in.

Calls for State Services Inquiry to be widened

The State Services Commission is already looking at whether Southern Response breached standards of integrity and conduct over its use of Thompson and Clark to monitor quake claimant, Cameron Preston.

Mr Preston said he had information the agency had spent $170,000 on the firm's services.

It can now be revealed a second quake claimant was being watched by it on behalf of the government agency.

The man, who has asked not to be named, said his claim was placed on hold after he received a letter from Southern Response's lawyer pointing to a post he had made to Facebook.

"I was searching, just casting a bit of a net out to see if anyone else was in a similar position and wanted to join together and get together some ideas on it," he said.

He subsequently found out that Facebook post was picked up and handed on to Southern Response by Thompson and Clark.

He was upset as to why a firm dealing with security threats was being asked by his insurer to keep an eye on him.

The man said he was awaiting further information from Southern Response on whether he had been placed on a list by Thompson and Clark of claimants who needed to be watched.

"When I look back it... they've hired a firm to look for information in response to a security threat but then they've gathered information on my claim as a part of that and they're using it in a different way from my claim.

"The way they ended up using it was bullying, to send a lawyer's letter to effectively try to manage my claim to limit their liability."

He has passed his experience on to Doug Martin, who is leading the State Services Commission (SSC) inquiry.

Oil Free Wellington planned to join Greenpeace in asking for the inquiry to be expanded to include MBIE's use of Thompson and Clark as well.

A spokesperson for the commission said no decision had yet been made over whether this would happen.

Southern Response and MBIE declined to be interviewed until the outcome of the SSC's inquiry was known.