A New Zealand woman says her Indian husband offered her an $8000 bribe to keep up a charade after she discovered he'd married her to stay in the country. 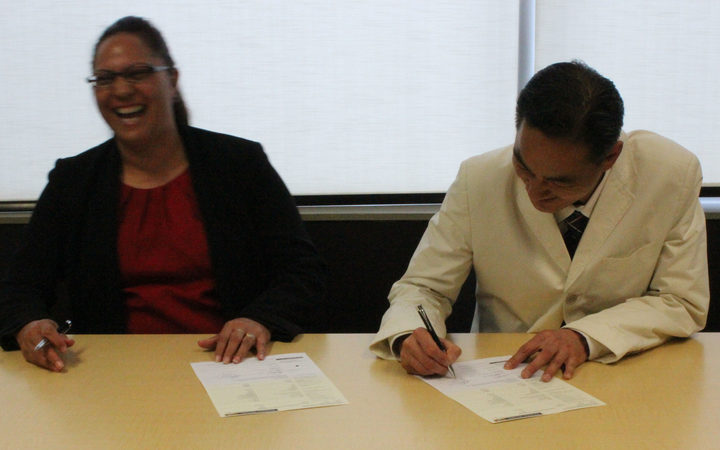 Aroha Raharuhi and Pankaj Badyal on their wedding day in 2016 Photo: Supplied

Aroha Raharuhi married Pankaj Badyal in 2016 after they met through friends in Ōpōtiki but the marriage collapsed after she realised he'd lied to her.

Ms Raharuhi was nearly 40 and Mr Badyal was in his early 20s but her family convinced her that he was right for her and they married.

However Immigration New Zealand rejected Mr Badyal's visa applications because it wasn't convinced they were in a genuine relationship.

He returned to India as they tried to argue his case.

Ms Raharuhi later realised she had been deceived and his parents were arranging a marriage for him there.

During a video call she saw a woman in the room who was not a relative and challenged him.

"Three months into the stay there he changed, communication just dropped off like I wasn't of any importance anymore ... and then I find out his parents are arranging a dowry over in India."

Ms Raharuhi estimated that she had lost $10,000 as she worked to help him pay off a loan his family had taken to pay for him to come to New Zealand, immigration costs, and for his flight home.

She had suspicions about his motives before they got together, including him being 18 years younger, Ms Raharuhi said.

He won her over with support from her family, including her children, who are now furious about what has happened.

He had since offered her a bribe, which was not dependent on them continuing a genuine relationship, she said.

"He said if you bring me back I will give you $8000 but I need a visa in my hand to be able to give you that money.

Meanwhile, Mr Badyal still insists theirs was not a marriage of convenience, saying he still loves Aroha and his parents are not arranging a marriage for him.

He said there was no bribe, but instead he told his wife his bank manager would not approve a loan for her unless he had a visa.

The Immigration Advisers' Body said immigrants exploiting the system are fuelling moves by Immigration New Zealand to crack down on fraud.

Immigration New Zealand said it had received more than 1300 allegations of relationship fraud since 2010 and investigated 49 of them.

It took action in the other cases by referring them to other parts of the organisations for decisions on their visas, it said.

"There is being far more care and caution being exercised by immigration New Zealand and it is in fact being fueled by the fact that many people have been exploiting the system."

She said she had been told lies by clients, and immigrants need to be upfront if they want advisers to help them.