A road near a scrap metal yard fire in Auckland will remain closed until midday tomorrow as firefighters continue to try bringing the blaze under control.

The fire at the yard on James Fletcher Drive between the suburbs of Favona and Ōtāhuhu began burning early this morning.

Firefighters this afternoon said it was expected to burn for another 12 to 24 hours, possibly until 2.30pm tomorrow.

James Fletcher Drive was set to remain closed until midday tomorrow, when the situation would be reassessed. 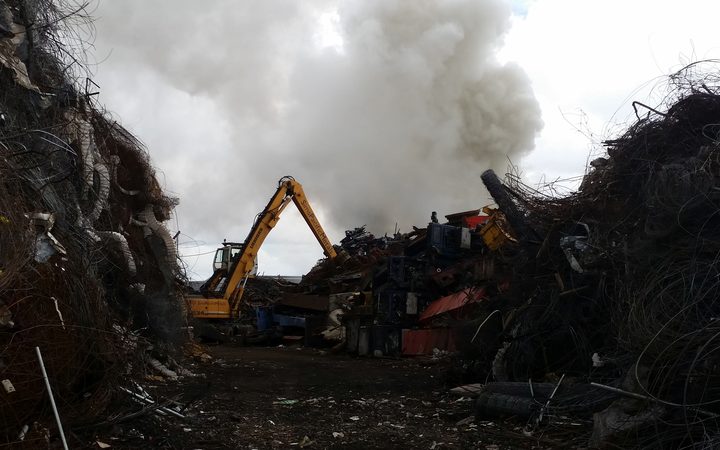 The fire at the scrap metal yard in Favona, as seen from the end of Kiwi Street. Photo: RNZ / Jessie Chiang

Assistant area commander Mike Shaw said it could take another day before the fire was put out.

He said there were diggers moving through the huge pile of metal to get to the heart of the blaze, but it was a slow process.

"We're making good progress ... but it's at least going to [take until] the end of the day tomorrow, and it could be longer [before the fire is extinguished]," he said. 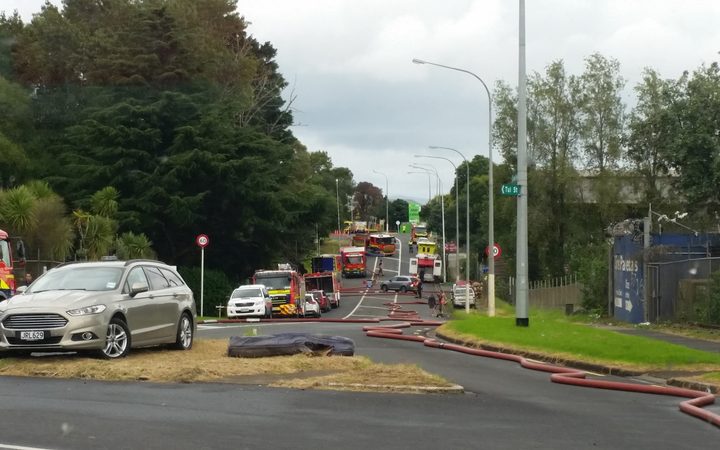 At its height, more than 80 firefighters and 20 fire engines battled the blaze.

The burning mound of chopped-up car parts and whiteware is about 80m long, 50m wide and 12m deep. 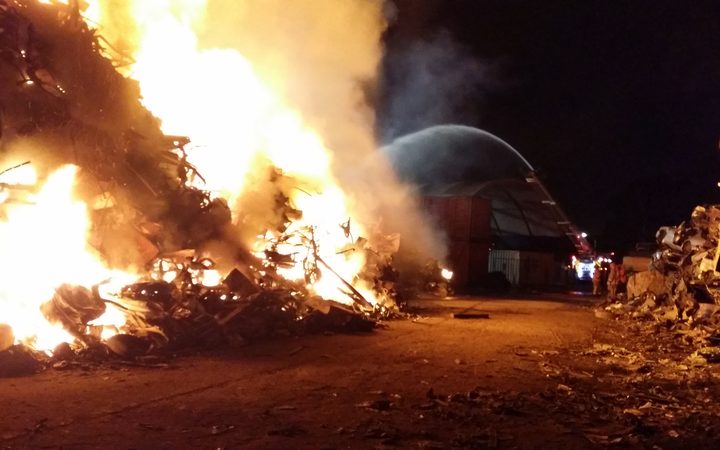 One man spoken to by RNZ said it was the largest fire he had seen.

"I don't know if it's close to the place I work at, so [I'm] not really sure what's happening [or] what the extent of the fire is," he said.

"I've rang my team members and I've already told them to go home [and] I'm just on standby."

Just around the corner on McGee street, Leilani Maropai heard small explosions coming from the area.

"I saw the fire this morning about 8.30ish, after I dropped off the kids to school," she said.

"I came over to my mum's and I saw the big ball of smoke that was over there [and] I was concerned because she lives really close to where the fire is actually at."

Fire and Emergency said residents did not need to be worried about the smoke because there were no hazardous goods or chemicals, but it did encourage people to keep their windows and doors shut.

Ōtāhuhu College kept its students inside at lunchtime and sent them home early due to the smell and fumes.

Fire and Emergency said any smoke residue should be wet wiped from hard surfaces, especially areas where food was prepared, floors and window sills.

People living in the area were encouraged to stay out of the smoke, stay inside, shut all doors and windows, and close down ventilation systems if they can.

Sims Pacific Metals said no one was available to comment. The cause of the fire is not yet known.