The 111 phone call made after a woman was shot dead at her home in east Auckland was played at a murder trial today. 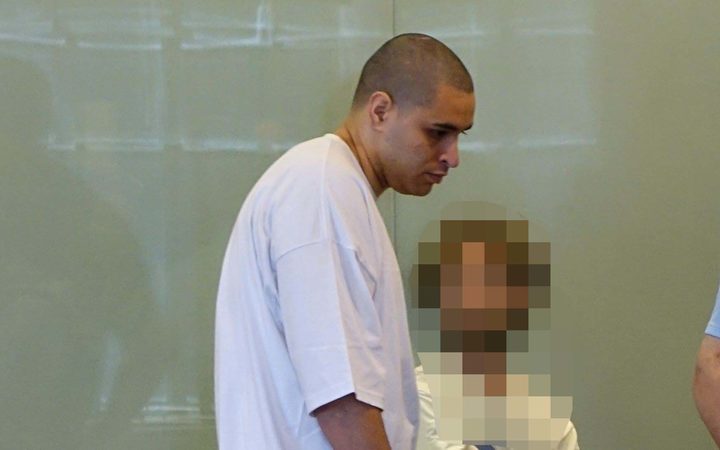 Turiarangi Tai, on trial in the High Court in Auckland for the murder of Chozyn Koroheke. Photo: RNZ / Laura Tupou

Turiarangi Tai is on trial at the High Court in Auckland for the murder of his girlfriend, 22-year-old Chozyn Koroheke. 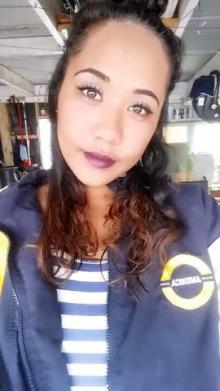 Ms Koroheke's brother, Nacyn, phoned for an ambulance after his sister was shot in his bedroom by the accused, he told the court today.

Ms Koroheke lived with Mr Tai and Nacyn, his then-girlfriend Samantha Douglas, and another man at a house in Pakuranga Heights.

Members of the Koroheke family were in court today while the 15-minute phone call played and Nacyn Koroheke was on the stand.

The victim's mother had her head in her hands while her husband supported her and others wept. Everyone's gaze was down.

Mr Tai could be heard in the background: "Stay with me baby, stay with me."

Ms Koroheke could be heard on the call.

The call-taker asked Mr Koroheke if "the offender" was nearby and if the gun was there.

The shooter and the gun were not there and he did not know where the man had gone, he said.

But Mr Tai - who shot Ms Koroheke - was in fact right by him, applying pressure to the wound with a towel after the call-taker had given instructions.

Nacyn had hid the gun in the ceiling of the room his sister shared with the accused while he was on the call, he later admitted.

The call-taker told Mr Koroheke the police had been alerted and wanted him to stay on the phone after the ambulance arrived so he could transfer the call over. But Mr Koroheke hung up.

"My concern wasn't the police getting there, it was just the medics," he said when questioned by Crown prosecutor Mark Williams.

He was asked why he had lied about the shooter - Mr Tai - and the gun not being there.

"I didn't think they'd send medics if there was a gun or a shooter there," he said.

"So I lied ... thinking that it would make it a bit more safer, in their minds anyway."

Mr Koroheke said his sister and Mr Tai had been quiet that day. "There was no talking at all, you could tell there was tension".

Ms Koroheke told him Mr Tai thought she had been with other men the night before. Mr Tai had dropped her off at a friend's house and picked her up that morning, he said.

Mr Tai was cleaning and packing boxes which he put in his car as if he was leaving and Ms Koroheke rested in their bedroom, he said.

Mr Koroheke said he had done that a "few times" before.

Mr Tai "snapped it open" and Mr Koroheke could see the barrells were empty but was assured it worked, he said.

"About an hour later" Mr Koroheke was in his bedroom with Ms Douglas and his sister when Mr Tai hot-wired the Toyota Silica - he heard the big bore exhaust.

Mr Tai yelled something and Ms Koroheke left the room and told him she would not help him because he had not talked to her all day.

She returned to the room "relieved" and they continued to smoke a cigarette, Mr Koroheke said.

But then, he said, they heard the exhaust again so Ms Koroheke went out to see what was happening.

"It would have been like seven or eight seconds she had exited the room until she came back in and she said he's [Mr Tai] just got out of the car with a shotgun."

He told Ms Koroheke to push the door shut.

What happened next only lasted a few seconds, Mr Koroheke said.

Mr Tai came into the bedroom where the three of them were with the shotgun at "shoulder height pointing it at my sister", he said.

He "jabbed" her on her right cheek with the end of the barrel, he said.

And just swore, called her a bitch, and lowered the gun, he said.

"We were all kind of just frozen."

He rested the shotgun on Ms Koroheke's right hip and then it went off.

"He dropped it [the shotgun] and was real frustrated that he had just done that and just like instant regret."

Mr Koroheke picked up the gun, snapped it open and saw there was one shell, snapped it closed and threw it out the door into the hallway, he said.

They did not know where their phones were so Ms Douglas ran to a neighbour's house to call an ambulance.

Mr Koroheke found a phone "just after" and called 111.