A Queenstown helicopter company has been fined $47,600 after Auckland man Jerome Box was killed in a 2014 crash on Mount Alta, near Wanaka. 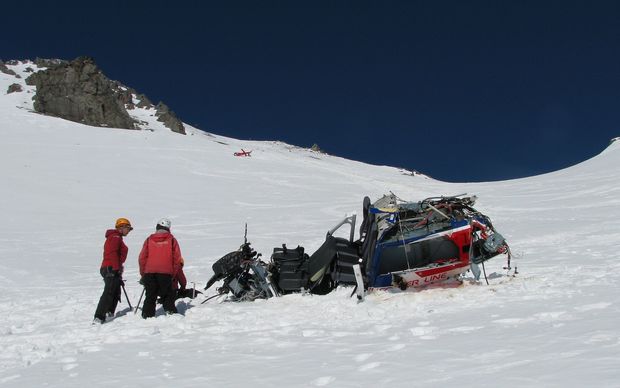 It was sentenced in the Queenstown District Court yesterday on two charges laid under the Health and Safety in Employment Act by the Civil Aviation Authority.

Mr Box and four other parishioners from St Paul's Church were on a heliski trip with a guide and pilot on 16 August 2014, when their Squirrel helicopter crashed and somersaulted 700 metres down the mountain.

Five of the helicopters occupants were ejected from the cabin and Mr Box was crushed and killed.

THL and the CAA accepted the company's failings were not the cause of the crash, but as a result of its breaches of the Act the loaded helicopter was about 27.6kg heavier than calculated during the fatal trip.

In addition to Mr Box's death, the four others ejected from the helicopter suffered various injuries.

'Everything about your life changed the day you lost your husband'

Chief District Court Judge Jan-Marie Doogue said in arriving at her fine she placed particularly emphasis on the "purposes of denunciation, deterrence and accountability for the harm done".

As both parties agreed THL's failing was not the cause of the crash, no reparations were sought. But the company made a voluntary payment of $165,000 to Mr Box's family as well as $50,000 to each of the other four victims.

In addressing Mr Box's widow, Adelle, Judge Doogue said: "Everything about your life changed the day you lost your husband, the father to your children".

"I heard from you the unimaginable difficulty that you have had over the past three and half years simultaneously your grief at the loss of Jerome whilst being there as a solo mother for your children, who are also processing the loss of their dad in the formative years of their lives.

"Your victim impact statement shows your trauma has been just getting through every day - one foot in front of the other, day after day, for you and your children."

Judge Doogue acknowledged the voluntary reparations paid by THL, but said "placing a monetary value on the loss of life in this case cannot make up for the grief so acutely felt by the loss of Mr Box".

Those taking part in the heliski trip had verbally provided their weights to THL, which is allowed under the Civil Aviation Rules, but the requirement to add 4kg on to each person's declared weight was not followed resulted in the miscalculation.

Director of Civil Aviation Graeme Harris said the decision of the court provided a "significant reminder to the aviation industry of the importance of carrying out commercial helicopter operations in a safe manner".

"This prosecution emphasises the fundamental requirement on all aviation operators to ensure that they know the risks of their operations and mitigate these risks as far as reasonably practicable," he said.

"In this case, the helicopter was being operated without appropriate weight and balance calculations being performed and that, from my point of view, is unacceptable."

"We acknowledge the suffering of the victims of the crash that led to this prosecution. We do not accept that their loss and suffering are an inevitable consequence of the high level of helicopter use in New Zealand and will strive to prevent a recurrence of such a tragic event."