A 72 year-old former music teacher at one of the country's most prestigious schools has been jailed for historic sex offending. 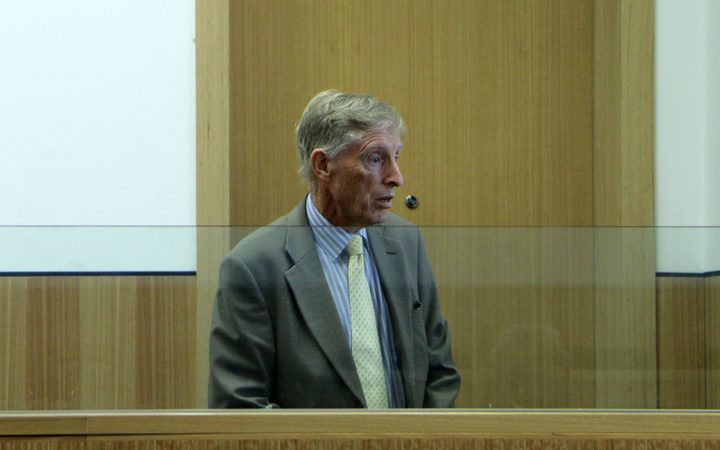 Trevor Ian Gibbs was convicted of five charges of doing an indecent act on a boy and one of sodomy, after a week-long trial in December.

Gibbs gave a brief bow to the judge and groaned as he was led into the cells at Manukau District Court today, after being sentenced to six years in prison.

Gibbs' victim had his teenage years taken away from him.

Gibbs groomed him during their private one-on-one lessons at Wanganui Collegiate, before sexually abusing him.

Today the man directly addressed Gibbs and told the elderly man of the damage he had done.

"For me personally, it started in a music lesson, in a boarding school that my parents had sent me to, in the hope of a better education - where you were the music teacher, an adult, married with two children - and I was a 13-year-old pre-pubescent boy. From that day onwards my life entirely changed."

Gibbs took care in choosing the places where he would abuse the boy - including his locked office and even the attic space above the office.

"You knew I'd remain silent and without conscience, you manipulated my life at the school further to ensure you could continue to take advantage of me."

He said he believed counselling and the support of friends and family had helped him move on from the awful experience.

"However, through the duration of these legal proceedings, memories which I had long suppressed, came back with an alarming clarity and on hearing the guilty verdict in December, it flooded over just how much this guilty verdict meant to me and how much the experience at school is still very much a part of my life."

The man also had a message for Gibbs: "For you, I can only hope that you use this time to come to face who you are and acknowledge to yourself the damaging and detrimental effects, not only on me and my family, but also on those of your children and your own family."

Crown prosecutor Jasper Rhodes argued against Gibbs getting any discount for his contributions to the community as a music teacher and performer.

"The defendant abused his position at the school, he abused his disparity of power between himself and the victim. It was through that position, through the position he had put himself in and through his respected position that he was able to continue offending in this way."

Mr Rhodes said it was the imbalance of power that enabled Gibbs' offending to go unreported for so long.

Gibbs' lawyer Annabel Maxwell-Scott said the offending dated back decades and now the court was dealing with a different man who posed little or no threat to society.

"He was a regular performer, contributed to the society in a wider way, in the church, in his running of the cafes and clearly, from all the references before the court, one can see that he has, in some people's eyes and in most people's eyes, contributed to society. And he's clearly a talented musician, a talented teacher and in my submission, it would be harsh for the Court to ignore that."

Ms Maxwell-Scott said Gibbs' family had been torn apart by the offending.

Judge Richard McIllraith said Gibbs had no insight into his offending and continued to deny his responsibility.

"The victim here was a young man at boarding school - away from home and away from the supportive environments that might otherwise have been expected. There was a significant breach of trust - you were a teacher, a confidant, and he was a young pupil."

Judge McIllraith said another aspect was the length of the offending - over several years.

"As also was the premeditated and manipulated nature of that offending, also as detailed by the victim. Finally, of course, is the serious emotional harm."

He said he had to sentence Gibbs according to the law as it was at the time of the offending - when sex offending against young people carried lighter sentences.

The judge decided not to increase Gibbs' sentence for his previous convictions for sexually offending against two boys in the 1970s.

He took some time off Gibbs' sentence for his age, medical conditions and the contribution he had made to society.