Police are apologising after an operation in the Coromandel, allegedly targeting cannabis, went slightly awry when blue liquid was left staining sand at a popular local beach. 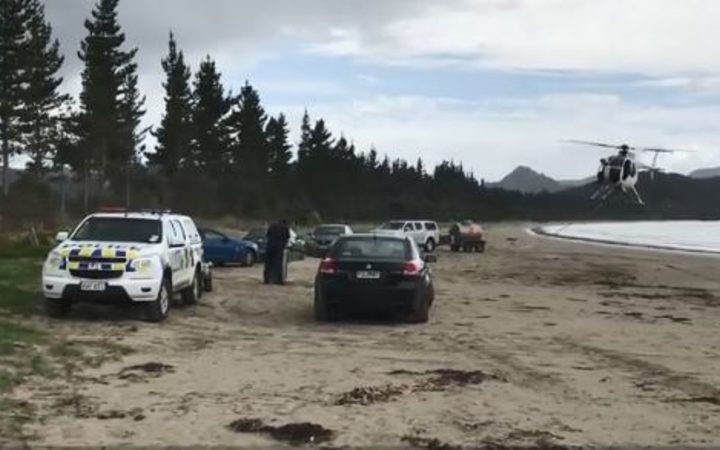 The helicopter spilled some of the liquid at a beach while refueling. Photo: Facebook/Whetu Paitai

A helicopter was spraying planted areas of Kennedy Bay on Monday but spilled some of the liquid while refilling the tank at the beach.

But local Whetu Paitai, who filmed it, said the police spray cannabis plants in the area at least once a year and he thinks it was weedkiller.

Once the helicopter took off, the other officers drove off. Mr Paitai said he then flagged them down to ask them to clean up the blue liquid where his children play.

"One officer got a paper bag and exercise book and started scooping up the sand and the other moved it around with his feet," Mr Paitai said. 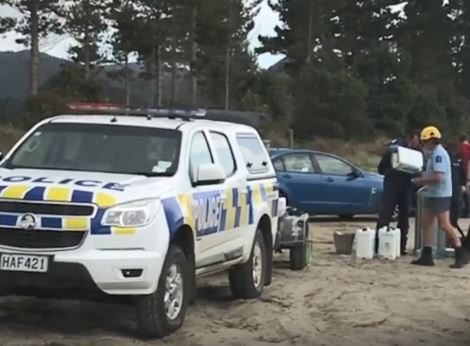 Police at the scene of the spill. Photo: Facebook/Whetu Paitai

"At the end of the day I would have had to clean it up so I just stood back at that stage and let them fiddle about and then eventually they just stood up, tied the bag off, looked at me and said, 'all right no worries thanks for that', shook my hand, jumped in the car and drove off."

Mr Paitai collected a barrel full of contaminated sand the officers had missed, he said.

"The fact that they just left it and paid absolute lip service to the idea of the environmental well-being of our beach was mind-blowing."

Mr Paitai followed up with Waikato Police, who sent the officer in charge of the operation, Detective Senior Sergeant Mark Greene, to visit him.

At morning tea yesterday, Mr Paitai and Mr Greene had a cup of tea and Mr Greene acknowledged the police needed more training in environmental best practice, which Mr Paitai was pleased with, he said.

"For once the police are taking responsibility doing the right thing that they need to do to fix it. Not trying to minimise things and pretend like they weren't in the wrong. And I thought we'd had a bit of a win there, I think everyone did."

In a statement, police apologised to the people of Kennedy Bay for the conduct during the aerial spraying operation.

"The police are conscious of the environment and made efforts to clean up the area," said Superintendent Bruce Bird.

But Mr Paitai said he was worried most about whether there was weedkiller in the mixture, not the blue dye.

"They spilled weedkiller on a public beach, the concerned locals expressed their concern at the time. They pointed out that that's where their kids play. Someone in that group should have taken note and fixed it."

The police would debrief fully at the end of the operation but would not confirm or deny whether the aerial operation was targeting cannabis plants, it said.

Mr Bird had asked to talk to Mr Paitiai, who was considering what to do next.