A stumbling and stuttering batting display as seen the Black Caps beaten in the final of cricket's Twenty20 Tri-Series at Eden Park in Auckland, going down by 19 runs via the Duckworth-Lewis method to Australia. 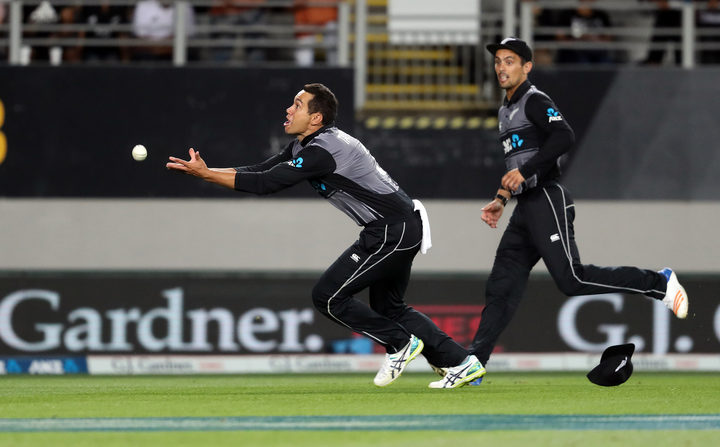 In what was a distinctly different match than the round-robin clash between the trasn-Tasman rivals at the same venue last Friday, where Australia made a T20 international world record chase of 245-5, New Zealand were only able to muster 149-9 after winning the toss and batting first on what started as a warm and sunny Wednesday night.

The weather did not stay that way, however, and after two separate rain delays the visitors were declared the winners at 121-3 in the 15th over of their innings.

The result, reached in front of a crowd of 22,072 at the country's most-debated cricket venue, meant Australia not only lifted the Tri-Series silverware, they also completed the tournament with five wins from five games.

It also means the Black Caps have three losses from as many matches moving into a five-match one-day series against England, with the first game in Hamilton on Sunday.

Just as it had on Friday night, the New Zealand innings got off to a rollicking start as Colin Munro and Martin Guptill whistled the ball to and over the oddly-shaped Eden Park boundaries.

But it was not a sign of things to come, or another enormous total for that matter.

The opening pair had blasted 48 off just 26 balls when Guptill mis-hit was on his way for 21 off 15 balls in the fifth over.

Five balls later Munro followed for a 14-ball 29, the Black Caps reaching 63-2 at the conclusion of the powerplay.

The removal of the in-form opening pair visibly lifted Australia's energy levels and from there they began to pick up wickets at regular intervals to put a stranglehold on the home team's innings.

Kane Williamson (9 off 9) was again bowled by a left-arm off-spinner, the superb Ashton Agar claiming the New Zealand skipper's wicket before trapping a sweeping Mark Chapman (8 off 9) in front two balls later.

Ross Taylor and Colin de Grandhomme's fifth-wicket partnership threatened to get the Black Caps back on track but when the latter fell for 10 off 6, Mitchell Santner, Tim Seifert and Tim Southee followed in relatively quick succession as the hosts slumped to 110-8 in just the 14th over.

With good support from Sodhi, Taylor managed to get his side into the last over.

The ninth-wicket duo put on 38 off 36, Sodhi blasting a huge straight six before he fell with two balls left and New Zealand came up short of 150, thanks largely to a steady 43 off 38 balls from experienced head Taylor.

It was well short of what would have been considered a defendable score at the start of the night, but optimisim levels among the home crowd were boosted just slightly in the early stages of the Australian chase.

As it had been with the New Zealand innings, though, it was not a precursor of what was to follow.

With Short very much leading the charge, 16 came off both the fifth and sixth overs bowled by Boult and Southee, respectively.

That meant the visitors reached the end of the powerplay in a strong position at 55 without loss, a brief shower of rain arriviing at that point and forcing the players to scamper from the field.

Play resumed after a delay of around 20 minutes, and it wasn't long before the home side signalled they weren't about to wave the white flag just yet as the finally removed Short, albeit for a brutal 50 off only 30 deliveries.

But when Warner (25 off 22) was bowled by Sodhi eight balls later and Agar walked past one and was stumped off Mitchell Santner not long after that, Australia were suddenly 84-3 and the Eden Park faithful had found their voice again.

Glenn Maxwell very nearly came and went as well, but his sliced drive off Santner barely eluded the three chasing New Zealand fieldsman, while Aaron Finch then got a life when he was well short at the non-striker's end and Williamson was unable to hit the stumps after a brilliant pick up.

They were chances New Zealand needed to stick if they were to be any chance, but both batsmen survived and their 37-run partnership ensured the title was Australia's as rain arrived for a second time and no further play was possible.