Northland DHB is waiting to see if tests show an algal bloom in Lake Ōmāpere is toxic, before putting out any health warnings. 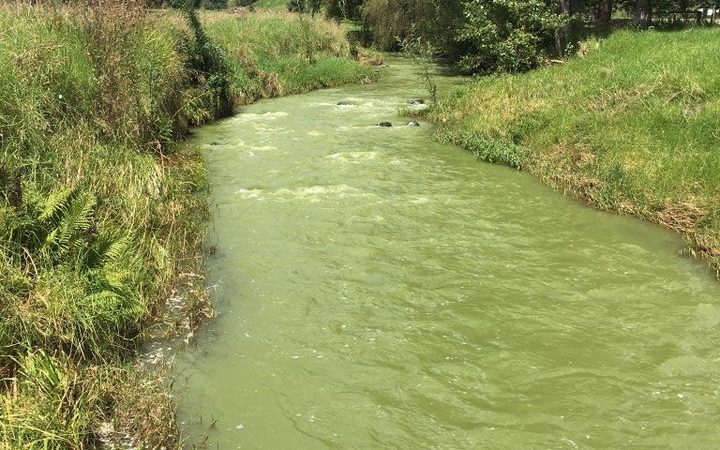 The bloom that erupted on Saturday turned the Utakura River green, capped with a foul-smelling white foam, which some locals said burnt their lips if they got close to it.

Local farmers, who draw water from the river, are angry the authorities knew algal levels were rising steadily in the lake and did not warn them a bloom was possible.

Residents downstream who swim in the river and the Hokianga harbour are also upset there were no official warning signs put in place.

The DHB said at this stage the bloom was an environmental event, not a health matter.

It said it will take action if the bloom proved to be toxic but in the meantime anyone who thought they had been affected by it should see their doctor.

Meanwhile, the Northland Regional Council is defending its actions over the potentially toxic algal bloom.

The council has come under fire for failing to warn the public of the massive bloom.

Farmers who draw water from the Utakura said they should have been warned that algal counts were rising.

The NRC said its role was not to issue warnings or post signs, but to keep the Northland DHB and Far North Council informed about water quality.

An NRC email dated 22 January shows the council told both authorities three weeks ago that algal counts in the lake had reached a trigger point.

"The biovolume is over the recreational guidelines, and samples have been sent for toxin testing," the NRC email reads.

"There is limited contact recreation (ie swimming and fishing) in Lake Ōmāpere itself, however there may be contact recreation downstream... and shellfish gathering in the upper Hokianga Harbour. An easterly weather pattern is forecast for next week which may concentrate cyanobacteria on the outlet side of the lake. "

An NRC manager, Colin Dall said although it was not the council's job to do so, an NRC officer who inspected the algal bloom on Saturday called on houses near the lake and as far downstream as Horeke to tell them about it.

He had also asked them to warn their neighbours, Mr Dall said.

Mr Dall said it would take about a week for lab results on the toxicity of the algae.

The shallow lake near Kaikohe has seemed healthy in recent years, but in the 1980's and again in 2003, toxic algae blooms have polluted the Utukara, making the water unusable for some time, and on at least one occasion, poisoning stock.

The Far North District Council said it was working to establish the exact level of risk to people and livestock from the algal bloom .

As a precaution, it was erecting signs along the Twin Coast Cycle Trail to warn users not to drink from or bathe in the Utakura River.