It will be the world's largest radio telescope, but some New Zealand scientists are asking whether it's worth this country spending millions to help build it. 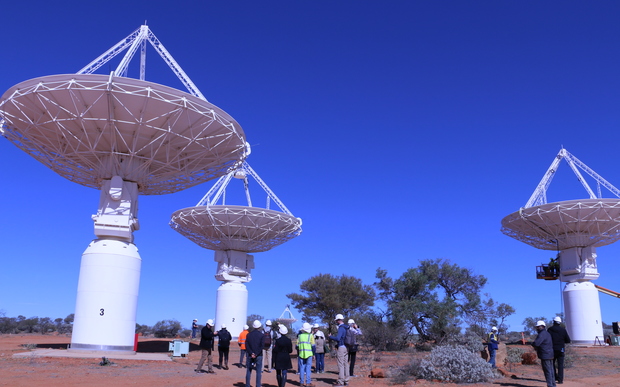 The Australian Square Kilometre Array Pathfinder, or ASKAP, with its 36 dishes, is a precursor to the gigantic SKA telescope. Photo: Veronika Meduna

The Square Kilometre Array, or SKA, will be the world's largest public science data project and will generate data at a rate more than 10 times today's global Internet traffic.

Its resolution and sensitivity will be 50 times greater than the Hubble Space Telescope.

The Ministry of Business and Innovation has poured $2.3 million into the project over the past three years.

It's estimated around $25m will be pumped into the project before both phases are completed around 2030.

A forum is being held in Auckland today and later this week to provide a technical update on the designing progress the SKA telescope.

Construction of phase one was due to begin earlier this year, but has now been pushed back to 2019.

However, among the astrophysics community there are concerns about the value the telescope will have.

University of Auckland physics professor Richard Easther said the project had shrunk in size in recent years and there was less interest since New Zealand first opted in.

"The number of users has gone down, some key people have left and the people who have come to New Zealand haven't been particularly interested in the SKA, it's not bringing people to New Zealand, it's not getting us excited about being users of the SKA," he said.

He believed the SKA was a poor use of taxpayers' money.

"The real worry is, once so much money is being invested in it, there is going to be a lot of pressure to make it look like it's a success.

"If you were to pressure me to use the SKA rather than other tools, my concern is that would hurt my science rather than help it," he said.

He was worried that by the time the project was complete, other more nimble missions would have already been able to gather the information.

Canterbury University associate professor Michael Albrow said while the SKA was important for the future, it was not a great fit for New Zealand.

"I think the majority of the New Zealand astrophysics research community feel this particular project won't generate the greatest scientific return for New Zealand relative to its cost."

He wanted New Zealand's involvement in the SKA reviewed.

However, the Ministry of Business and Innovation stood by the funding.

International Science Partnerships manager Simon Rae said the money was mostly made up of grants to research institutions for design work on the telescope.

It would enable New Zealand to be involved in a major global science project.

New Zealand SKA Alliance director Andrew Ensor said a lot of the money invested came back to the country in construction contracts.

"Because New Zealand has been so heavily involved in the design phase of the computer system, we can expect quite a substantial return back to New Zealand organisations to actually built the telescope and then ongoing software maintenance and upgrades over the next decade," he said.

It was the largest science project in which New Zealand had a substantial lead role, Dr Ensor said.

The telescope would be used to continue to make new discoveries over the next 50 years.