Nelson, Marlborough, Buller and Westland are in for an evening of persistent heavy rain which won't ease until overnight. 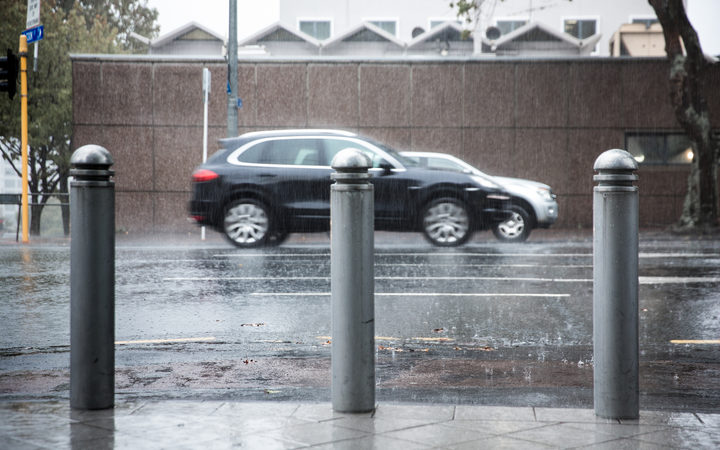 MetService said about 150 millimetres of rain fell in the Western Ranges of Nelson in the last 24 hours, while 100mm fell in Collingwood.

Another moving band of heavy rain went through Auckland at about midday causing flooding and rising streams.

In the hour to 1pm, 24mm of rain fell on Auckland city.

Niwa tweeted this picture of a stream in the Browns Bay area near the top of its cement banks.

That rain band is now making its way through Waikato and down into Taranaki and is expected to arrive in Wellington at about 6pm.

The capital is in for an evening of heavy downpours, and people should be aware of flooding, slips and poor visibility, said MetService.

The Auckland deluge caused the city's Big Gay Out festival to be cancelled for the first time in its 30-year history.

Organisers pulled the plug about midday when pools of water made electrical connections unsafe.

The rain also caused problems at the MetService offices after the roof sprang a leak.

34mm of rain at Albert Park since this morning might feel like a lot, but we've had 10mm inside our office just down the road when the roof sprang a leak today! With more rain on the way for Auckland we might need a bigger bowl! Check the forecast at https://t.co/tks2Q4pbWD ^JM pic.twitter.com/Gcwug1WJUh

Heavy rain is expected for most of the North Island and part of the South Island today bringing the potential for flash floods and land slips.

Nine millimetres of rain fell at Franz Josef between midday and 1pm.

If you have images of flooding, please email: iwitness@radionz.co.nz

Ten days ago, the West Coast of the South Island was reeling after storms and king tides closed roads, cut power, destroyed houses and a church, and left dozens of tourists stranded in buses.

Two weeks earlier, more than 200 homes in the Coromandel township of Kaiaua were flooded by seawater, many left uninhabitable.

MetService is warning of severe rain and thunderstorms from Westland northwards through Nelson and Marlborough, western Taranaki, the Central North Island, Coromandel and Great Barrier island.

But no one will be unaffected today, said MetService meteorologist April Clark.

"Everyone's going to get a dose of something today, just in those areas we're pinpointing it could be a lot heavier for a time. That means there could be surface flooding for a time, poor visibility on the roads, rivers and streams could rise rapidly and for areas that are prone, there are possible slips."

Ms Clark said while it seemed like a lot of wet weather for February, heavy summer rainfall was not unusual.

She said this weather system, bringing massive amounts of rain, is quite different from the previous one, where flooding was caused by the combination of northerly winds and tides.

Not that that's much comfort if you are still mopping up.

"Obviously if people are getting rain on top of what they got before and they are still trying to clean up from the last event, this puts a bit of a hamper on things. People should just keep aware and keep updated with Civil Defence."