Forty-five feral geese living at the Waimanu Lagoon north of Wellington have been evicted from their water-front property. 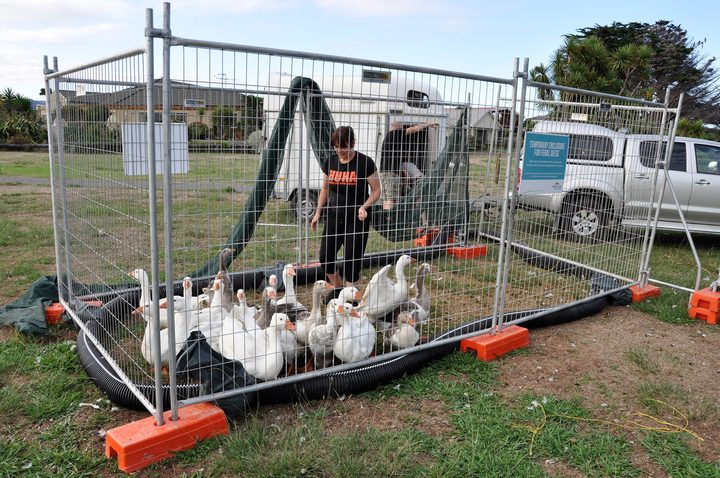 The Kapiti Coast District Council and animal welfare group Helping You Help Animals (HUHA) captured the birds after complaints from residents that the geese were roaming the neighbourhoods in gaggles, looking for food.

Council spokesperson Rob Cross said the geese were dumped illegally at the Waikanae lagoon a few years ago but had now out-stayed their welcome.

"Initially the residents liked them, it was a bit of a novelty, but of course they started breeding and the numbers built up over the years and although we've tried to control them - tried to control their breeding success - it's a pretty difficult thing to do and slowly the numbers have crept up and as their numbers have grown the residents around the Waimanu lagoon have become less and less tolerant of their presence - mainly because of the droppings.

"Last year, we started to receive a few complaints as the numbers crept above the 40 mark and we started receiving more complaints after Christmas because a lot of the grass around the lagoon died off and the geese were hungry and they started to roam the neighbourhood in a couple of gaggles that people took exception to."

He said the geese were friendly, and there had been one complaint of 'fowl-play'.

"We had one complaint late last year from a woman whose small dog had been attacked but other than that we didn't have any complaints about aggression.

"The geese were very used to people and quite a few people feed the geese, so unless people actually approached their nests or something like that the geese weren't aggressive at all."

A pen was set up near the lagoon, where the geese were fed for four days prior to capture. Once they were used to the pen, they were rounded up.

"Once they seemed to be comfortable feeding in and around the pen we went ahead with the capture. It all went like clockwork actually."

Mr Cross said all but two female geese were relocated to rural properties in the area - their new owners under obligation to treat them as pets, and not as dinner.

"They all went to lifestyle blocks and farms and I believe the people actually had to sign a declaration that they were going to keep the birds as pets rather than kill them and eat them."