The captains of all 16 teams in this country for the New Zealand leg of the World Rugby Sevens being held in Hamilton got together last night at Hobbiton, a rural movie set used for the Lord of the Rings and the Hobbit film series. 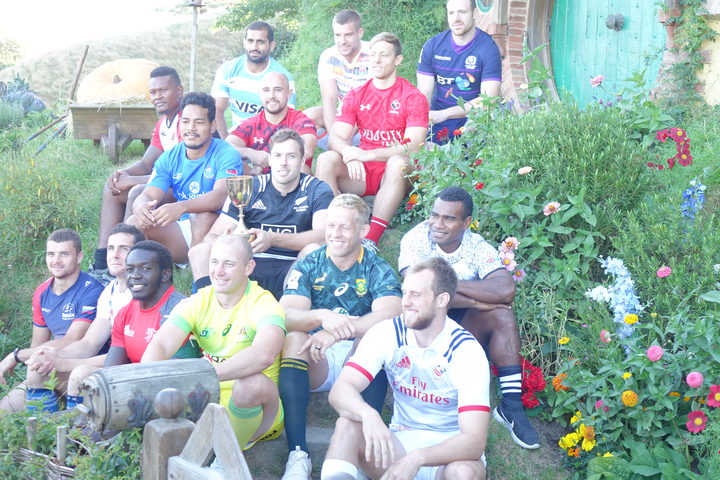 Sevens teams' captains pose for a photo at Hobbiton. Photo: RNZ / A McRae

It was the official captains photo, which by tradition is taken at a local iconic site in the region where the event is being staged.

The captains were later joined at the idyllic rural location by the rest of their teams for an official welcome dinner.

Hamilton has taken over hosting the New Zealand leg from Wellington after the capital lost the rights due to falling crowd numbers.

It is guaranteed the event for the next two years.

For New Zealand captain Tim Mikkelson it meant coming home as he is from Waikato being Matamata born and raised.

"I played a lot of years for Waikato so it is amazing to be playing sevens here and to come home and play in where I am from is something special."

Kyle Brown is acting skipper of the South African team.

He said the Hobbiton setting was a really cool venue for a photo shoot.

"I think the captains photo is normally serious most of the time and we go to iconic landmarks somewhere and this is interesting and comical climbing into a set of a movie that is something that I watched growing up, so good fun really."

The United States came fourth last weekend in Sydney and Captain Ben Pinkelman is predicting a surprise in Hamilton.

"We have gotten better at every stop so far this year even though we started very slow, so we are looking at going out there and winning our pool first, then move on through the quarters and finally get to the final and win that."

Brown sees it differently even though his side were beaten 29-nil by Australia in the Sydney final.

"We are growing and we are on the right path and we are looking forward to the weekend and feeling confident.

When asked if a New Zealand - South Africa final would be the ideal script for the weekend he said it would be great to see South Africa and anybody in the final.

Mikkelson certainly is not taking anything for granted.

"We don't look past our first game as it is France and they are a team with big boys up front and have extreme pace outside."

The home advantage may help the New Zealand side particularly as it is a sell out crowd at Waikato Stadium on both Saturday and Sunday.

Dallas Fisher has been the driving force in getting the tournament to Hamilton.

He is staking a lot on it being a success, but is in no doubt it will be tough.

Mr Fisher said Hamilton has a very strong events industry and the city is close to Auckland and very central.

"The city is committed to the event and people are excited.".

Mr Fisher said 60 percent of the tickets have been sold to the Waikato region.

10,000 people are expected from outside the region.

The event which has cost $2.5 million to stage is expected to bring in about $5m to the local economy.

Sean Murray, who heads major events and venues for the city council is confident the weekend will go without any real problems particularly with over indulgence of alcohol.

"It's all about alcohol management and monitoring."

Mr Murray said there will be a lot of other activities for people out side of the stadium,

"People won't just be sitting in the stand watching rugby and drinking as they will be coming and going."

Kenya play Samoa in the opening game on Saturday morning. New Zealand's first match is is up against old foe France.