A Waiheke Island man who chopped down native trees to build a treehouse in an 'ecologically significant' area of the island has been fined $21,000. 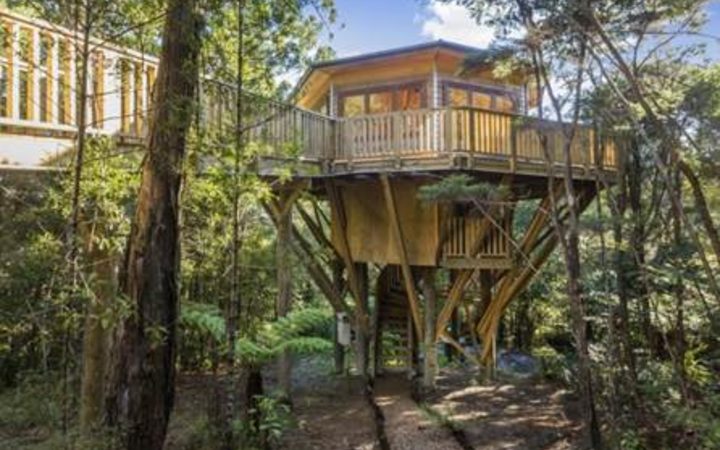 The council found 380 square metres of land was cleared to build the treehouse Photo: Supplied

Wayne Gilinksy built the 120-square-metre home on Awakiriapa Bay scrubland in a rural eastern area of the island in 2012.

Mr Gilinsky, who owns a plumbing and drain-laying business on the island, purchased the land for the house 17 years ago because of its natural beauty, peace and tranquility.

He said it provided him with an opportunity to realise his "long-held dream of living amongst the trees" and chose a natural clearing opposite a 500-year-old kauri tree to build his house 11 metres above the ground.

The ancient kauri was one of several that was damaged or chopped down during the construction of the house.

But soon after the house was built Mr Gilinsky's teenage daughter got sick and he considered selling the house to cover the costs of treatment in the United States.

In July 2016 he realised he would not be able to sell the property as it was, so he approached Auckland Council to formalise its construction with retrospective consents.

Gilinsky applied for resource consent for the two-bedroom treehouse to be used as visitor accommodation. In the application he estimated vegetation removal for the home was 150 square metres.

In December 2016 council carried out a search warrant at the property with a surveyor noting 380 square metres of native bush had been cleared.

A council ecologist added that 580 square metres of threatened ecosystem had been permanently lost as a result of the construction, including habitat used by threatened North Island kākā and protected native lizards.

The ecologist also noted kauri on the property may have been exposed to kauri dieback due to the earthworks and tree trimming.

However, Mr Gilinsky has told RNZ he had cleared scrub and punga which were under three metres in height - an activity he was not aware was banned on the property as he did not realise it was an ecologically significant site.

He said he did not cut down significant trees.

Mr Gilinsky described himself as a nature lover and said the tree house had been built in a natural clearing with the use of a helicopter.

Auckland Council regulatory compliance manager Steve Pearce said the council was not entirely sure what trees had been cleared for the house.

"Certainly there were some stumps there that were of significant trees."

Those include planting 350 square metres of his land with native trees, carrying out pest control on his property for the next five years and ensuring no more trees are felled on the property.

"It was really disappointing to find out this had happened but it was good to get it resolved and it was good for us to get a decent sentence out of the district court."

The council laid charges against in January last year and he pleaded guilty to removing indigenous trees in an ecologically significant site and building above the maximum height allowance.

In sentencing, Judge Melanie Harland described the offending as reckless and careless but did acknowledge that Gilinsky had tried to get legal consent for the house without being approached by council.