More than 29,000 Australians are demanding a New Zealand man be deported after he avoided jail time for a one-punch attack on another man. 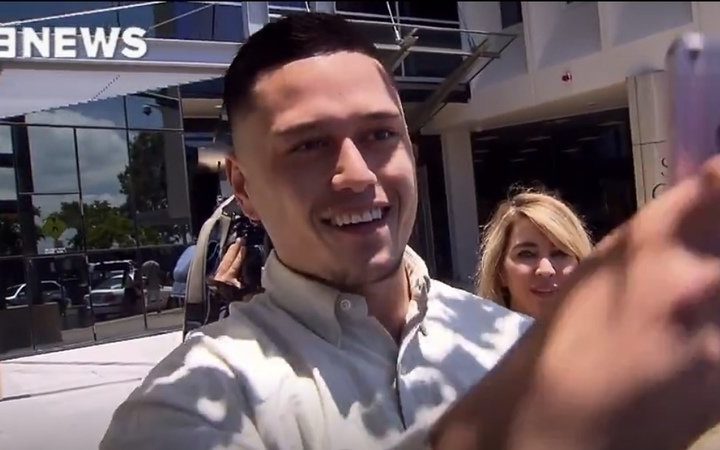 Caleb Maraku was sentenced to probation for the attack in Surfers Paradise in November last year.

Despite the crime carrying harsh penalties in many states, no conviction was entered.

Footage of the fight showed two people attacking the 19-year-old victim before Maraku hit him in the side of the head.

The young man fell unconscious to the floor, but later recovered from his injuries in hospital.

Maraku was charged with assault causing bodily harm and was sentenced to 12 months probation at the Southport Magistrates Court after pleading guilty.

He also had several conditions: that he not drink alcohol and pay more than $300,000 toward the victim's medical bill.

Media footage taken after the sentencing showed him laughing and attempting to take selfies with reporters.

His lawyer Lisa Searing defended the light sentence, saying there were mitigating factors.

"The court was not aware of his behaviour after court, neither was I, and the court wasn't shown any video footage," she said.

Ms Searing said the magistrate took into account Maraku's age and the fact he had a baby, the fact alcohol played a part and he had no past violent offences.

Those signing the petition also called for Maraku to be deported back to New Zealand.

One-punch attacks on the rise in Australia

A rise of one-punch attacks in Australia have caused a backlash over the past five years, with some states implementing life in prison as the maximum sentence if the victim dies.

Paul Stanley's 15-year-old son Matthew died after a similar attack at an 18th birthday party in 2006. He has been lobbying against youth violence ever since.

"I think it's an absolute disgrace. I honestly can't get my head around the fact that these judges are giving these sort of non-sentences," he said.

"Going back to my son's death, if he'd been standing about three inches to his right he would be alive here today. He would have landed on the grass, he wouldn't have hit his head on the concrete guttering.

"That's how close it is between life and death. The victim was punched, he hit his head against the concrete and he's just darn lucky that there isn't serious, serious injuries."

Mr Stanley said the harsher penalties for a one-punch attack were in place, so it matched the crime.

"He should do time, it's a simple as that. That's why we have prisons, so that people who do something wrong can be caught, they can go to court and have some time behind bars so that they can realise what they've done wrong.

"Maybe some of them never will, but there should be a custodial sentence handed out, not a weak-as, ditchwater 12 months probation. That is a disgrace."

Criminals are only deported from Australia if they are sentenced to prison for 12 months or more.

The country's Department of Home Affairs declined to comment about Maraku's immigration status.