A new gang-violence game is being described as a "comical time-waster" by its makers, but others don't think it's so funny. 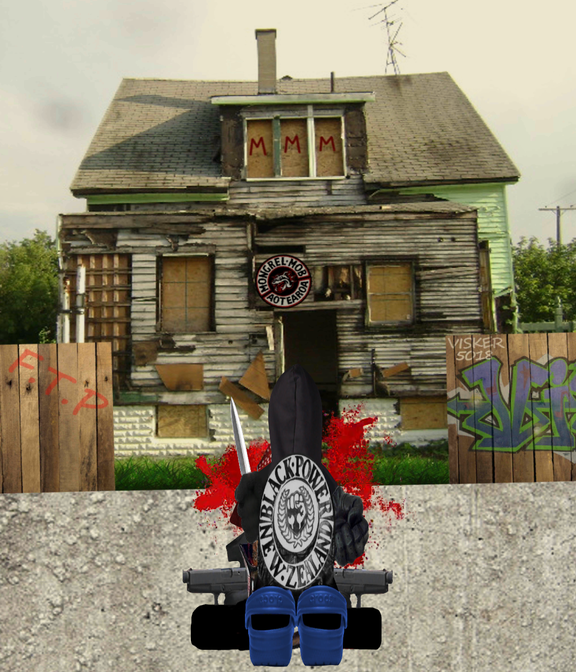 'Mongrel Mob Defence' was released on Google Play on Friday and depicts a caricature dressed in Mongrel Mob attire defending his 'gang pad' with a gun, against incoming Black Power caricatures carrying knives.

The Mongrel Mob character's head was originally a photo-shopped image of former Mongrel mob member William Hurinui - aka Greco - of the Notorious chapter in the South Island, who died in 2012.

The image was taken by a New Zealand artist who did not want to be named and was furious the image had been used in this way.

The artist said he did not want to be associated with the game, or media coverage of it, and had contacted those behind the game to get the image taken down or legal action would be launched.

The makers of the game, Supremacy, said it was developed over the past week and was designed to be a "comical time-waster".

The makers said in an email they did not want to be named for the sake of protecting friends and family.

"Although the majority have received the game quite well and see the humour a limited few don't. The few that don't unfortunately have taken to the extreme and have regularly been sending all kinds of verbal abuse, threats of violence and even threatening to take legal action if the game is not taken down."

They said the image of Greco had been taken down a short time ago.

"The application has just been updated to avoid legal action being taken against the development studio which sees the protagonist replaced with Alf Stewart from Home and Away and also to reduce the amount of abuse and threats we have been receiving. Some of the threats have been quite serious and the safety of our development team is our top priority."

Supremacy said they had no plans to remove the game which has been downloaded more than 1000 downloads and has a 4.5 out of 5 star rating.

"The application has made it quite high on the app store and last we checked it held 9th spot in the top free games.

"Because the larger quantity see the humour in our application we will not be taking it down permanently and many of our users are looking forward to the future release of Black Power Defence which is expected to be released in the following weeks."

Black Power member Denis O'Reilly said the game undermined what a lot of gang leaders had been trying to achieve in the way of dispute resolution.

"The model of attacking, you know the gang house that's where someone lives, that's like LA drive-by shootings or something and so this is like 1980s stuff and there's been a huge effort to annihilate that sort of stuff.

"People will have disputes, so how can those disputes be resolved in a way that doesn't imperil families and so this is like mischievous. It's almost like hate crime, you know."

He said he would not be surprised if the game was taken down in a few hours.

"It is dangerous because sometimes the young people can't distinguish between reality and what's online.

"Google aren't going to court this sort of stuff."

The app also contains a picture of a New Zealand Police car.

A police spokesperson said they would be making further enquiries about the use of their image.

"New Zealand Police in no way condones the use of the image of the Police car used in this app and will be making further inquiries. Police will not be making comment on the content of the app at this time."