The Gore District Council is set to go to court to find out who is responsible for thousands of tonnes of stockpiled waste from the Tiwai aluminium smelter.

Southland's mayors have written to the government asking it to step in and find an urgent solution, but the government does not seem keen to pay for the disposal.

In total there are at least 22,000 tonnes of Ouvea premix in piles in Mataura and Invercargill, and there are suggestions there could be more around Southland.

The problem was created by Tiwai's processor, Taha International, which went bust 18 months ago, and left by its liquidators who walked away just before Christmas.

Gore District chief executive, Stephen Parry, today said the council would be taking a two-pronged approach to dealing with the issue.

At an urgent meeting yesterday, senior councillors resolved that, subject to confirmation from its legal advisors, the council would seek a declaration from the Environment Court as to who is responsible for the storage of the premix.

The council is also in discussions with a company that proposes to remove and dispose of the premix offshore.

Mr Parry said there was a definitive offer on the table. 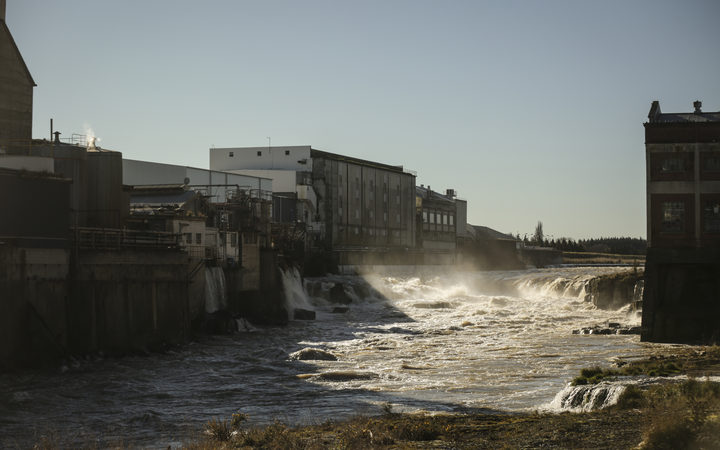 The waste is being stockpiled at the former Mataura paper mill, which backs on to the Mataura River. Photo: RNZ / Rebekah Parsons-King

There is a cost involved and the council will be working with other interested parties to secure a funding package.

"We have to remember this is not just a Mataura or Gore District Council problem, it's a Southland problem."

Many people opposed the granting of the consent two years ago because in an extreme flood on the Mataura River, the waste could mix with water and give off toxic ammonia clouds.

Extra flood protections and safety requirements were put in place.

The expiring consent cannot be extended, so the waste's owner will have to apply for a new one if it stays there, but the council is not sure who the owner actually is, Dr Davidson-Watts said.

"Most assets would fall to the Crown. This perhaps being seen as a liability, we will need to talk to the Crown about their position," he said.

The region's mayors have written to the Ministers of Finance and Environment asking for urgent talks to find the $4 million needed to get the waste processed overseas, the Gore District Council said.

Southern Storage Limited, the owner of the mill where much of the waste is stockpiled, said it was the Crown's problem because under law it now owns the material.

"The only way this can be solved is if the government comes to the party," company spokesperson Michael Laws said.

But the government is so far denying this.

"The government is hoping for a local solution and it has no current plans to pay for the disposal," a spokesperson told RNZ.

New Zealand First MP Mark Patterson said locals were trying their best, but the government would have to help.

"There's a lot of everyone wanting someone else to take responsibility, and that's clearly not good enough for the people of Mataura who are sitting on a toxic dump right by their river, so we have to sort this out."