A service station employee in Hamilton has been assaulted during a robbery at the Challenge Service Station on Naylor Road. 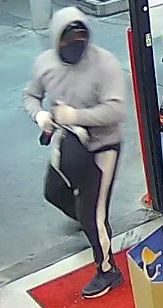 Four people, one armed with a knife, walked into the store and assaulted the worker before stealing cigarettes and cash just before 10pm yesterday.

The offenders fled the scene in a stolen silver car which was later found in Morrinsville.

All of them were carrying bags and wearing clothing with hoods.

The worker has minor injuries.

Police would like to hear from anyone who has information about the robbery.