Firefighting helicopters are back in the air above Wanaka this morning, keeping a 200-hectare grass fire from spreading.

The fire broke out on the slopes of Mount Roy just before 3pm yesterday, and a nearby holiday park was evacuated as a precaution.

Fire and Emergency said a wind shift prompted plans to evacuate the park again early this morning, along with 30 homes, but conditions changed again and the need was averted.

Civil Defence spokeswoman Michele Poole said helicopters with sluicing buckets are now back in the air, after being stood down overnight.

She said even though no homes are currently in danger, the fire risk is extreme and people need to stay away from the area.

Principal Rural Fire Officer Graeme Still said that the helicopters are working on the east and west flanks of the fire.

He said conditions are calm and the lack of wind and cool temperatures are helping the crews.

Mr Still said the fire is deep seated and even though the flames are being doused by the monsoon buckets, it will take at least two days more work by ground crews before the fire could be put out.

An investigator is en route to the scene to establish what caused the fire. 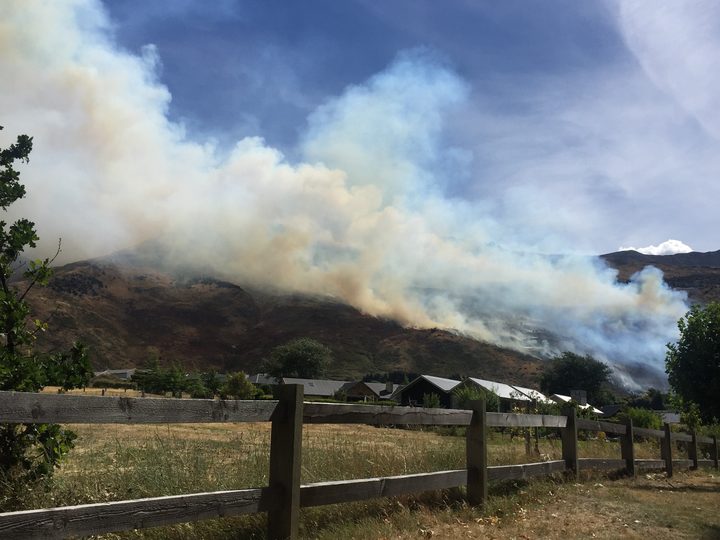 The owner of a campground that was in the path of a large grass fire in Wanaka said it's been a scary night.

The owner of the nearby Wanaka Kiwi Holiday Park and Motel, Andrea Kendrick, said some of the camp's 150 occupants moved out last night as a precaution but a sudden wind change early this morning spared the camp.

She said everyone else had their bags packed and were ready to leave if necessary.

Yesterday Lauren Young from the Wanaka Kiwi Holiday Park said their site backed onto Mount Roy and she could see the flames.

"It's going quite rapidly up the hillside behind us. We're fully booked at the moment, we've got about 16 rooms and about 45, 50 sites that we're evacuating," she said.

She said she understood the fire may have been started by someone burning rubbish.

"My husband went for a drive and spoke to a gentleman who said that there was someone burning off a small amount of rubbish and it's just gone out of control."

Ms Young said the wind was blowing the fire up Mount Roy, not down towards the Wanaka township.

A man has been arrested and charged after flying a drone near the large blaze.

Police charged the 33-year-old with endangering a transport facility after eight helicopters battling the blaze yesterday had to be stood down for 15 minutes when the drone was spotted.

He is due to appear in the Queenstown District Court next Monday.