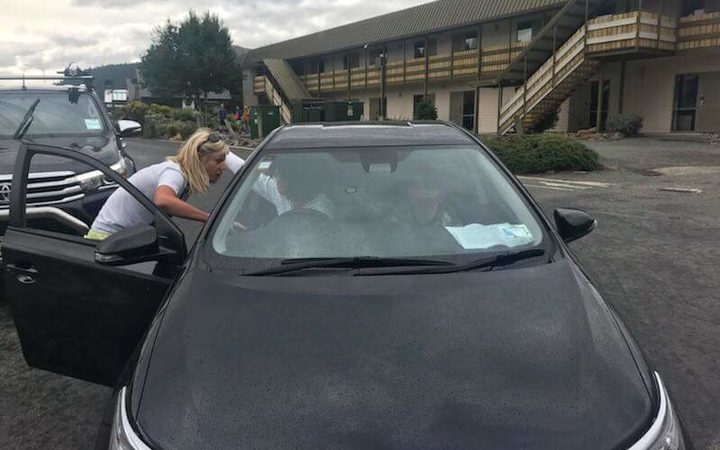 Amy Hollamby took the keys off a tourist who she says was driving dangerously. Photo: Supplied tp RNZ

Yesterday, a Timaru woman took the keys off a tourist who was driving dangerously and says she encourages other motorists to do the same.

Amy Hollamby, who owns a Timaru building company, was driving to Tekapō on Christmas Day when she saw a black rental car overtake her family car, three other cars and a bus on a blind corner.

Ms Hollamby, who was driving with her husband, pulled in front of the black rental car when it stopped in Tekapō, whilst another car that was overtaken blocked the rental car in, preventing them from moving.

"Adrenaline took over ... I was so scared, my heart was racing ... my husband was as well and he just said we have to do something about this, we can't let her continue," she said.

They took the keys out of the rental car's ignition and found a police officer, who took the keys and "put them straight in his pocket".

Ms Hollamby said she would encourage any motorists who saw dangerous driving to do the same.

"Don't get me wrong, I don't think New Zealanders are the best drivers either but I don't think we take this sort of risk," she said.

Ms Hollamby said however it was better to intervene before the police had to scrape bodies off the road.

"If you ever see anything on the road like that don't hesitate to call *555 (where you can report a bad driver) or stop and talk to them and then call the police," she said.

"It's just a matter of getting these people off the road because if you see them do something silly they will do it again, and it won't be long before they kill somebody."

She said all tourist drivers should have to take driving tests before being allowed to drive on New Zealand's roads.

Mr Thomsen said motorists should call the police if they saw dangerous driving, and let the authorities handle the situation.

"The best thing to do is get the police involved," he said.

"And hopefully the authorities are going to be able to respond and get there and deal with it rather than people trying to take the law into their own hands, which can potentially end up actually making things worse and increasing the risk of something going wrong."

No one from the police was available for an interview today, but in a statement, a spokesperson said motorists should call the police if they see dangerous driving.

"Motorists and members of the public are urged not to take the law into their own hands, but to call police," they said.

"On the roads police respond to high risk driving behaviour and take appropriate action in response to those offences according to the law."