A Hawke's Bay winery has apologised to local iwi, Ngāti Kahungunu, for carving a walking track on land believed to be of huge ancestral and historical importance. 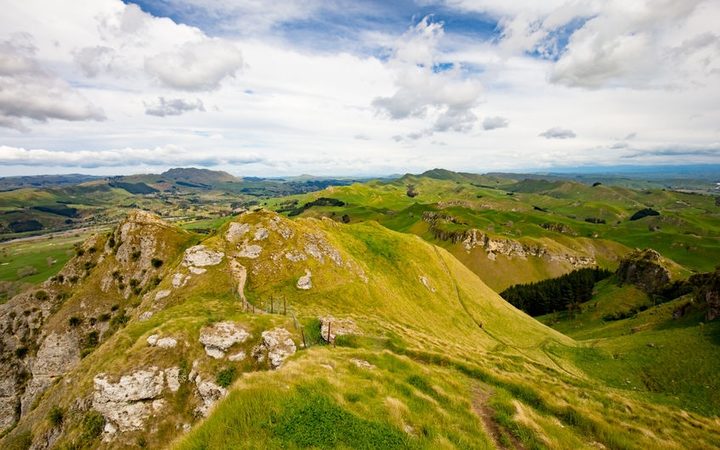 The view from the top of Te Mata Peak near Hastings (file photo). Photo: filedimage/123RF

The iwi was so outraged to find the zig-zag track on Te Mata Peak last Friday that one iwi member wanted to summon a curse on the landowners.

"It was like a stab in the heart really, what the hell, I mean I couldn't believe it ... unbelievable.

"This might sound over the top but it's like putting a walking track on Ayers Rock [Uluru], or bulldozing a track on the top of Mount Everest. That's what it means to us."

Ngahiwi Tomoana said 200 years ago his great-great grandmother, Winipere Rotohenga, was captured on the hill by Waikato warriors and marched off to Maungatautari to be a slave.

He has since made contact with a spokesperson for Craggy Range Winery who expressed their sincere apologies.

But he said the damage had already been done.

Craggy Range Winery chief executive Michael Wilding said he was disappointed to hear the grievances of the iwi and never intended to offend anyone.

Mr Wilding said the Hastings Distinct Council did not inform the winery that they should consult with the local iwi.

"We did this as a community project and we relied entirely on the Hastings District Council's guidance on who to notify, whether we should have sought consultation with any other parties, and that certainly didn't come out during that process."

Hastings Mayor Sandra Hazlehurst said there were no requirements for owners of private land to consult the community or local iwi about landscape changes.

However, Ms Hazlehurst said the council was open to changing district requirements in the future.

"We need to talk to all parties to see if the district plan needs to be strengthened."

Craggy Range Winery said the decision to purchase the land was never a commercial venture, and it only intended to give the community and those who loved the outdoors an avenue to see the eastern side of Te Mata Peak.

The two parties have agreed to meet in the new year to find a resolution.

Decision not to notify iwi 'unlawful'

The Environmental Defence Society said it was considering taking the council to the High Court for failing to inform the winery to consult local iwi.

Chief executive Gary Taylor said the application should have been notified.

"We think that the decision not to notify the application was unlawful for two reasons. The first is that Te Mata Peak is an iconic, nationally and regionally important landscape feature and any desecration of that obviously involves the public interest.

"And secondly because the peak is of cultural significance to local iwi."

Mr Taylor said the council should have been aware of these factors.

"We think that the notification decisions and the substantive decision to approve the track was very sloppy."

He said Craggy Range should acknowledge the error and reinstate the land to its original condition.

"Craggy Range is one of New Zealand's leading wineries with a corporate reputation for excellence, I think they are starting to realise that this was a mistake and I think the best thing for them to do in the circumstances is to reinstate the land to its former state and bow to public pressure in that respect."