Things are warming up in the Bay of Plenty's big blue backyard with leatherback turtles being seen in numbers. 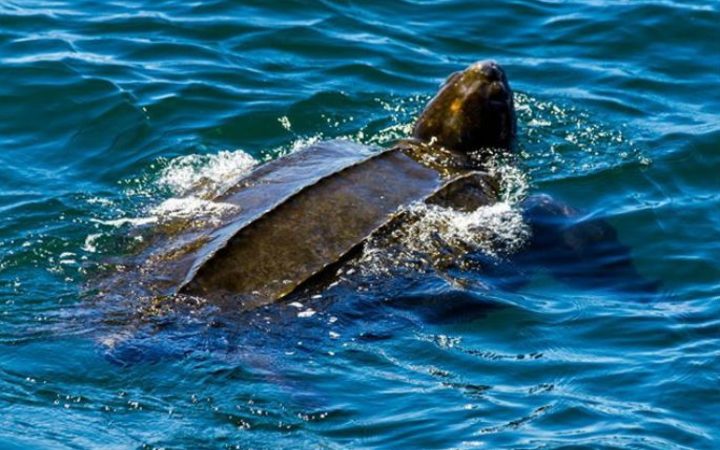 A video from January this year showing three of the normally solitary turtles close together caused a bit of stir internationally, he said.

"We've been talking to some scientists researchers and there's a suspicion now that they used to breed on the beaches here. But when Māori arrived and westerners as well and with the build-up of people living here they either got eaten or forced away from their breeding ground.

"But there's definitely an increase in leatherback turtles in the region. The north eastern current's come down now past Mayor Island and onto our continental shelf and they are here to eat the salps and the jellyfish.

Salps are linked strings of clear jellylike creatures that look a bit like fish eggs. The current brings the salps and jellyfish and the turtles follow the food.

"We've seen them every single day. Yesterday we saw two about a kilometre away from each other.

"Seeing them together in a cluster like this would indicate they are breeding or coming together for mating. At this stage it's all supposition, but it's looking like they are coming back to their ancestral grounds in numbers. And these things are massive."

When he first spotted one from the boat Brandon thought it was a large tractor tyre.

"The amazing thing about the leatherback turtle is they are the ones that dive the longest, and they dive the deepest. Most other turtles have a hard keratin shell. A leatherback's shell can compress so when they dive to great depths the turtle actually shrinks in size."

Leatherbacks can dive to more than 1km and can remain underwater for four to seven hours.

The turtles are part of what has been an unprecedented week of marine life.

They saw Orca on Wednesday just offshore from Motuotau / Rabbit Island and several of the big sunfish, the Mola mola, which also eats jellyfish and is another endangered species.

The World Wildlife Fund page on Leatherback turtles says they are the largest sea turtle species and also one of the most migratory, crossing both the Atlantic and Pacific Oceans.

Pacific leatherbacks migrate from nesting beaches in the Coral Triangle all the way to the California coast to feed on the abundant jellyfish.

Although their distribution is wide, numbers have seriously declined during the last century as a result of intense egg collection and fisheries bycatch.

Globally, leatherback status according to IUCN is listed as Vulnerable, but many subpopulations (such as in the Pacific and Southwest Atlantic) are Critically Endangered, the WWF says.

Hundreds of thousands of sea turtles a year are accidentally caught in shrimp trawl nets, on longline hooks and in fishing gillnets.

Turtle feeding grounds such as coral reefs and sea grass beds are also damaged and destroyed by activities onshore, such as sedimentation from clearing of land and nutrient run-off from agriculture.