Frustrated business owners on Auckland's North Shore are worried a major slip that swallowed a piece of machinery could be coming for their buildings next. 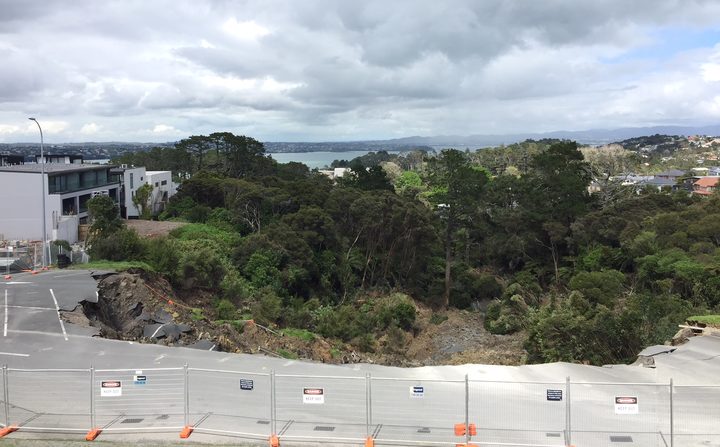 In October, part of the car park on Rawene Road in Birkenhead collapsed down a valley, and on Tuesday another section gave way.

Auckland Transport spokesman Mark Hannan said the car park was built on the site of an old landfill, and engineers were still investigating the exact cause of the second slip.

Tony Cradwick from Highbury Optometrists, which is only metres away from the hole, saw the land crumble.

"I noticed a lamp post moving steadily down at which point we realised there was a bit of heavy machinery and people jumping around as part of the bank was collapsing," he said.

"It all just escalated from there [and] took about three to five minutes in total.

"We now have a humongous horseshoe tear which I estimate to be probably forty metres deep... It was a pretty scary event."

"Look at the kerb, in the time that we've been talking, that kerb has dropped around about half a metre," he said.

"If you want to see action and landslides, now's the time to do it."

Mr Hannan said a piece of machinery, which was used for drilling, was swallowed by the second slip and was buried by earth and gravel.

He said it was being used as part of the stabilisation work, which will now be paused for at least a week.

Sarah Dimonline, the production manager at Kerilin Fashions, which is also on Mokoia Road, saw the drilling on Tuesday before the ground caved in.

"We were worried that they were putting too much pressure on the ground ... but you sort of just watch and you can't really say anything, you can't interfere down there," she said.

"When we left they were still drilling and that was about four o'clock and then the next day we came back here and all that had dropped away."

Ms Dimoline said it was scary to see the slip widening, and she was worried more of the road could go.

That could have a huge effect on her business, she said.

Many businesses were frustrated by the lack of information from the Auckland Council and Auckland Transport, Ms Dimoline said.

Mr Hannan said regular updates have been sent to businesses and apartment owners near the slip and since Tuesday, a person has also been in the area talking to people worried about what happened.

There could be more slips but not any that could affect the buildings on Mokoia Road because they were on natural ground, not former fill land, he said.

Auckland Council building inspectors are continuing to monitor the site.