A twin baby who died during birth should have been delivered urgently, a report has found. 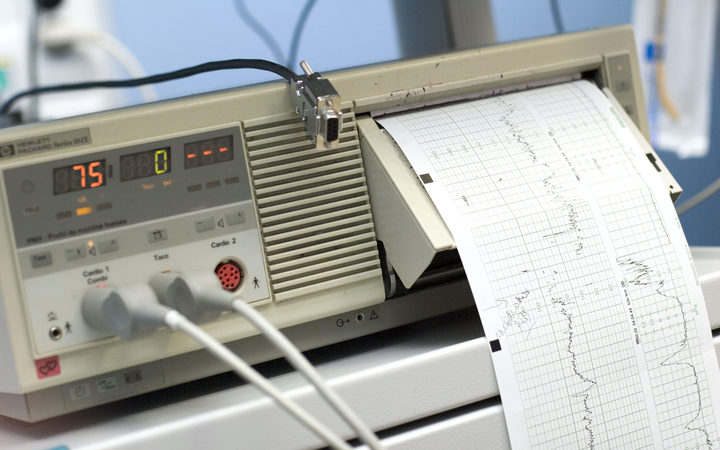 The doctor failed to recognise that the heartbeat of both twins had become abnormal, the report found (file photo). Photo: AFP

In his report, health and disability commissioner Anthony Hill found an obstetrician gynaecologist breached patient rights for failing to take urgent action to deliver the baby boy in 2012.

The woman, who became pregnant through IVF treatment, went into labour spontaneously about four weeks early, giving birth to the first of the twins 12 hours later.

However, the umbilical cord, which was engorged, was around his neck, and he was "flat and floppy with no respiratory effort and no audible heartbeat", Mr Hill's report found.

Despite resuscitation efforts, he died 25 minutes after birth.

When the baby's waters ruptured shortly before birth, the amniotic fluid was clear with no sign of any foetal distress.

The obstetrician gynaecologist, Dr C, told Mr Hill that although the babies' heart rates were monitored continuously, there were occasions when there was a loss of contact with the monitor.

She had used a foetal Doppler monitor to listen to the baby's heart as well.

"I did not consider at the time that I had any reason to suggest a forceps, Ventouse or emergency caesarian section for the second baby," she told the commissioner.

Dr C added she was the only on-call consultant obstetrician and gynaecologist on duty that afternoon, and had had to attend to other patients urgently, including another high-risk birth.

However, an independent obstetrician, Dr E, told the DHB that the heartbeat of both twins had become abnormal, and between 4.20pm and 6.30pm that day intervention was needed to deliver them. This had gone unrecognised.

An expert advisor quoted in the report, John Short, told Mr Hill that no Caesarian section was needed prior to the first twin's birth, but he had "serious concerns about the CTG interpretation and the lack of action between the births of the twins".

"Following the forceps delivery of [the first twin], there was no reason to pursue a spontaneous birth of the second twin and ... an instrumental delivery should have been performed at the earliest opportunity to expedite the birth," Dr Short told the commissioner.

A post-mortem into the baby's death diagnosed lack of oxygen lasting long enough to cause physical harm, usually to the brain.

The twins' parents, Mr and Mrs A, met Dr C to discuss the post-mortem findings. They told Mr Hill's office later they understood from this meeting that an in-utero event, or an under-performing placenta, had caused their baby's death.

"We accepted this information and at no point did the hospital accept any responsibility."

Mr Hill's report did not name the DHB involved as it received "adverse comment" only and was not found to have breached patient rights.

This was despite a draft report by the DHB into the death that identified deficits and proposed recommendations.

Mr Hill notes, however, that "there was no further consultation within the DHB, or follow up, until some three years later after the complaint was made to HDC."

He said he was very critical of Dr C's failure to recognise the CTG abnormalities and to take appropriate action.

He recommended that Dr C provide a written apology through him to the twins' parents. He added that if Dr C, who is no longer practising medicine, wished to resume practising, the Medical Council should review her competence to do so.