A Sri Lankan family facing deportation fear they will return to nothing if they're forced to leave the country. 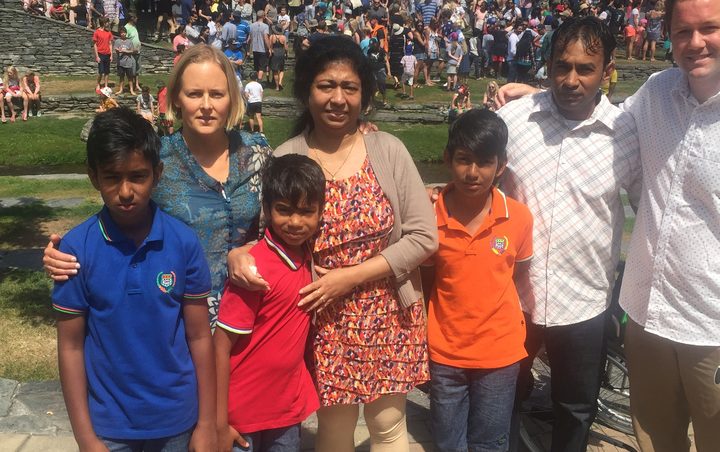 Sam Wijerathne, Dinesha Amarasinghe and their three young sons moved to New Zealand eight years ago, but Ms Amarasinghe's visa was cancelled after she was diagnosed with multiple sclerosis.

The family are now in a last-minute bid to stay and yesterday hundreds marched through Queenstown to support them.

The three Wijerathne boys, aged 12, 10 and 9, know no home other than Queenstown.

Ms Amarasignhe had secured a student visa and then a work visa, but three years later she was diagnosed with MS.

When she tried to renew her work visa in June it was turned down. Immigration New Zealand said she did not have an acceptable standard of health and the family have been unlawfully in the country since July.

Mr Wijerathne said he fears he will have to take his children back to Sri Lanka with nothing.

"They have a good future in this country, they like to live here. I don't have anything [in Sri Lanka]. When we came here we planned to live here for [the] future."

Mr Wijerathne cannot apply for a work visa because he has previously been deported from Japan.

The family did apply for residency in 2013, but this was still being processed when their work visa was cancelled.

About 400 people joined them as they took their fight to stay to the streets of Queenstown yesterday, and Mr Wijerathne said he was touched.

"Thank you for my community. It was a big help for me... Really, I have no words."

The march was organised by local MP Hamish Walker, who said he thought the turnout was good when about 40 people started the march with the family.

Then as they came around the corner he saw a couple of hundred people waiting to join them.

That was a very emotional moment for the family, he said.

"Just seeing how much support is out there for them - it's a very stressful time for them.

"They were blown away, they were just overwhelmed with emotion just from the support."

Queenstown resident Tam Schurmann, who runs community group Baskets of Blessings, was among those who joined the march.

Ms Schurmann said when she delivered a basket of goodies to the family at the former holiday park where they live, she could tell they were struggling.

"When I walked into the cabin I was heartbroken. Dinesha was in a very bad way. The children were huddled in a corner looking absolutely traumatised to be honest," she said.

"Mum was in tears, dad was in tears. There was a feeling of hopelessness and I realised we needed to do more."

Ms Sherman said the family had made a big impact on the town, with Mr Wijerathne coaching a cricket team and both parents involved at the local school.

Immigration New Zealand's Marcelle Folley said in a statement Ms Amarasinghe's work visa was turned down because the agency became aware that she had had a prolonged absence from work.

A medical assessment found she was likely to impose significant cost or demands on the New Zealand health services.

The family's lawyer has now asked that they be allowed to stay on humanitarian grounds. The Immigration and Protection Tribunal is expected to make a decision within six months.