A dog once banished from Westport's library after a complaint from the public is now its new volunteer staff member. 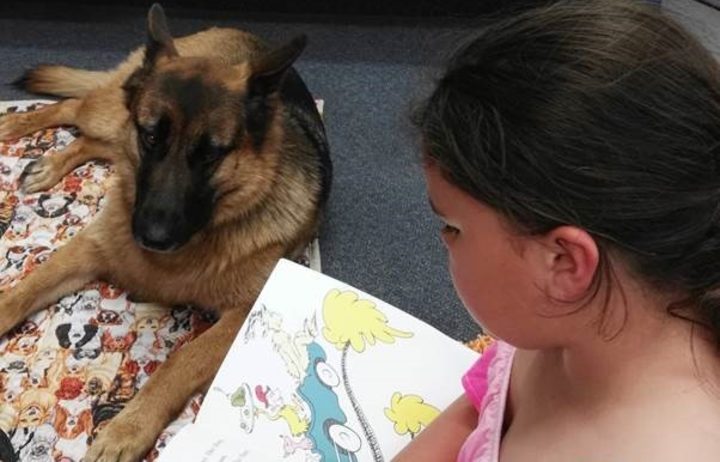 Quaker is read to by one of the library's younger readers. Photo: Supplied

Quaker, a three-year-old German Shepherd, has had official status bestowed on her by animal control officers, and she is now a listening post for younger readers.

The dog is part of a national literacy development service that involves children reading to dogs, which has been extended to Westport's public library.

Owner Gregg Quinn, a 66-year-old former journalist with the Westport News, said Quaker had grown up on a diet of being read news and current affairs, and is well suited to the role.

"She is very laid back. She loves kids and she loves people and I think it's quite soothing for her to lie there, listen to the kids read, and I'm right there with them."

Mr Quinn said Quaker has been a regular at the library since she was a pup. He called it his second home.

"She would come to the library with me and got used to it. I'd sit down and read the newspapers - The Press and National Geographic and she'd just lie there and sit by me for the next two hours."

He said Quaker got to know that the library was always followed by a walk, a swim, or even a surf if conditions were right at Shingle Beach on the Buller River.

"She's an absolute water dog. It was like her reward."

He said the dogs were allowed in the library because there was no formal policy around whether they could or could not be there.

Mr Quinn said a complaint was made to the dog control officer, who was then forced to act.

"Our cover was blown, and I was quite upset, as were the others."

He said the library management then wanted to introduce the Reading to Dogs service. The Buller district librarian Clenda Wockner said several libraries in New Zealand and overseas run a reading to dogs programme.

"The rationale behind this is that a child who is having difficulty mastering reading is likely to see an increase in confidence when able to practice reading aloud."

Mr Quinn said he was invited to take part with Quaker.

"It apparently now means Quaker is a member of staff, which means she's allowed in the library," he said.

A library spokesperson approached by RNZ News said Quaker has been approved by the animal dog control officer, and is now a volunteer staff member.

"I mean, it's not like we're paying her - not even in dog biscuits, but in lots of cuddles and kisses," she said.

Ms Wockner said dogs were great teachers because they listen carefully and let children go at their own pace which increases relaxation in the reader.

"It is an opportunity to associate reading with something which is a pleasure rather than a feared task. Dogs do not judge, criticise or laugh at mistakes. Children who have difficulty with reading become very self-conscious when reading aloud but it is very important in developing readers."

She said a University of California study by the School of Veterinary Medicine found that children who read to a dog once a week for 10 weeks, showed a 12 per cent increase in reading fluency.