A Wellington taxi driver has described how he fled for his life after a passenger shot him on Saturday night. 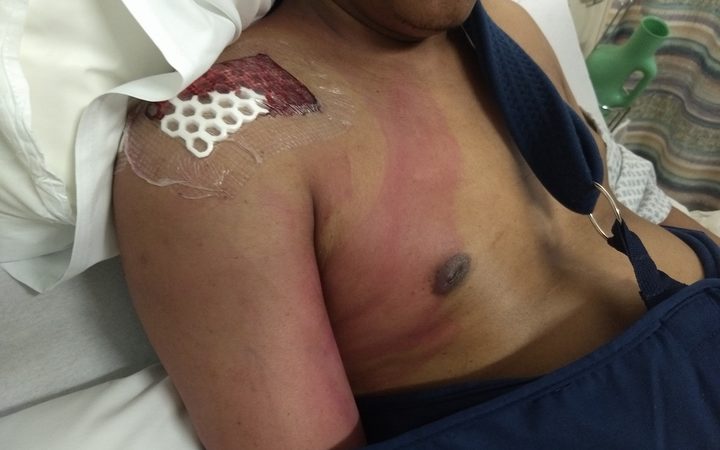 Alem, who is recovering in hospital, said he feared the gunman would kill him. Photo: RNZ / Charlie Dreaver

The driver is recovering in hospital with a wounded shoulder and police are still hunting for the man who fired the gun and the woman who was with him.

Alem, who is from Ethiopia, said there was no argument over the fare - the couple got out of his car without paying.

The man then pulled out what looked like a pistol, told Alem to get out the car and when he refused, shot him.

"They don't want to pay the fare, I don't even care about the fare. I never ask them, but I do care why I be shot. Why? They don't know me, I don't know them," he said.

Alem said he took off in his car terrified the man was about to fire again and kill him. He got help at a nearby petrol station.

"Then I go to grab my hand. All my clothes is blood. And then I'm very lucky really, two women are there they are helping me a lot. And then today they visit me in hospital, kind, kind people," he said.

He is being looked after by the Ethiopian community in Wellington.

A spokesperson, Nigussie Fenja, said for many people driving taxis was the only job they could get and the shooting has left them with some tough choices.

"Or do I go out and take a risk? I don't want to lose my life and put my family into a dire situation," he said.

Mr Fenja said passengers often ran off without paying and now it seemed like they were prepared to kill.

On Courtney Place, taxi drivers like Johnny Fordham spoke of their shock and horror at what had happened.

"You can't defend yourself from a firearm.

"That's a real freakish thing for someone to be in Courtenay Place and having a gun. Why the hell would you bring a gun into town and then jump into a cab? The guy was either off his rocker, to shoot the actual cab driver. Why would you do that?"

Mr Fordham said he knows of a driver who is still recovering from a broken jaw after being beaten up by two passengers who also tried to set his car on fire.

It will be weeks before Alem recovers from his bullet wound, and in the meantime he will be unable to work.

Police are reviewing the camera footage from the taxi and hunting for the shooter and his accomplice.