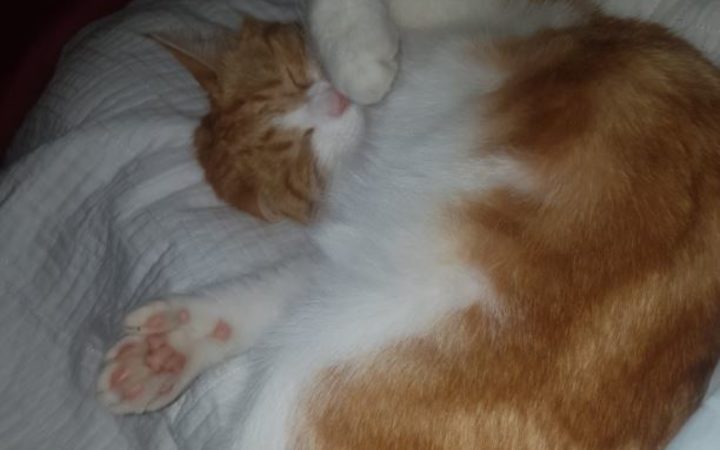 On Instagram, Ms Ardern said Paddles was much loved.

"To anyone who has ever lost a pet, you'll know how sad we feel."

To anyone who has ever lost a pet, you'll know how sad we feel. Paddles was much loved, and not just by us. Thanks for everyone's thoughts. And on behalf of Paddles, please be kind to the SPCA. They found her before we did, and we will always be grateful for that.

The ginger and white cat from the SPCA, which catapulted to international stardom, was hit by a car.

Sarah Austen-Smith from the Prime Minister's office said Paddles had sadly died after being run over by a car near the prime minister's Point Chevalier home yesterday evening.

A tweet this morning, from the 'First Cat of NZ' account said donations to the SPCA were welcome in Paddles' memory.

Just spoke w Paddles’ Dad, @NZClarke. If you would like to remember Paddles you are most welcome and encouraged to donate to the NZ SPCA.

The man running the account, who's chosen to remain anonymous, described himself as a "PR guy" for Paddles and spoke to RNZ last month about why he created the account and the "really overwhelming" response from fans.

Hi, I'm Paddles and I am the First Cat of New Zealand. I have opposable thumbs, I'm purrty special. pic.twitter.com/MPkxdhWCRu

@FirstCatofNZ's tweets drew international attention and Paddles featured on a BBC list of political pets and in a Vanity Fair article on Jacinda Ardern, and her "tech-savvy cat"

"Paddles was kind of special," she said.

"Paddles had an extra digit on her paws, so, yeah, a very special cat."

They have sent flowers and a message to Ms Ardern and her partner Clark Gayford.

Originally named Sadie, Paddles was found on the streets of Ranui along with her two siblings and brought into the SPCA just before Christmas last year.

She spent three months in their care, including two-and-half-months at an SPCA foster home while she recovered, Ms Midgin said.

SPCA worker Sarah Jolly who looked after Paddles and organised her adoption said "it was love at first sight" when Ms Ardern and Mr Gayford saw the cat at the shelter in March.

"Jacinda met her and pretty much fell in love straight away and changed her name to Paddles there and then when she saw her extra toes."

It was "super sad" news to hear of Paddles' death," Ms Jolly said.

She had been in touch with the First Couple and said "both were devastated".

Too much grief this week already. RIP Paddles, you were a super special kitty. Thinking of @jacindaardern & @NZClarke xx

Fake twitter Paddles was annoying but I had no grudge against actual lazy cat Paddles.