An "insensitive" tweet from police that joked about breaking the news of someone's death to family members has prompted an apology from the highest echelons of police management. 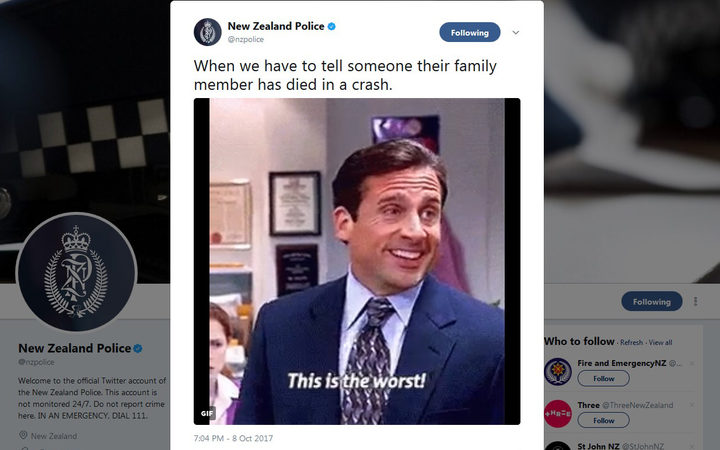 The tweet, sent after a weekend of road crashes that killed nine people, was swiftly deleted Photo: Twitter / Screenshot

The tweet, which has since been deleted, has been widely criticised on social media.

A screenshot of the tweet before it was taken down shows it headed with the words, "When we have to tell someone their family member has died in a crash," accompanied by a photo of comedian Steve Carell smiling and captioned: "This is the worst."

Police pleaded earlier today for drivers to take more responsibility on the roads, after nine people died in crashes over the weekend.

The Twitter response to the tweet has been swift, with one user describing the tweet as taking the booby prize for "social media fail of the week".

Staggering that anyone even considered tweeting that, let alone searched for the meme, drafted the tweet & then shared with the world!

A group of teenage boys whose friend died in a car crash last Boxing Day told RNZ's Checkpoint with John Campbell the tweet was "pretty messed up".

In a written statement, police deputy chief executive Karen Jones said the tweet "was quickly deleted after we realised the imagery was wrong and insensitive".

"We feel terrible about this mistake, as we put victims at the heart of what police do," Ms Jones said.

"We are extremely sorry and will learn from this."

We apologise for the recent road safety tweet. We quickly realised it was wrong & insensitive & it was immediately deleted. Thx for feedback

Ms Jones said social media was "a hugely important channel" and police appreciated the prompt feedback from the community, "who pointed out the inappropriateness of the tweet".

She told Checkpoint police posted hundreds of comments on social media every day "and in this case we got it wrong".

Police were trying to raise the issue of road safety, she said. The tweet was deleted within two minutes of being posted.

"There are well-meaning people behind us who are absolutely distraught because they come to work to try to raise these kinds of issues in a sensitive way and it was the wrong call."