David Cerven had money troubles and was wanted for three aggravated robberies when he was fatally shot by police in Auckland's Myers Park in August 2015. 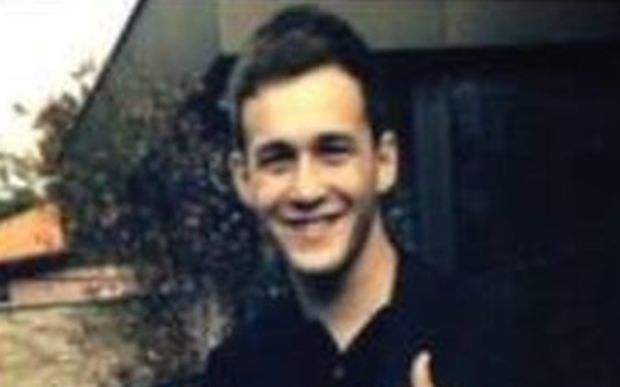 An image of David Cerven that was released by police in 2015 saying they wanted to locate him in relation to three armed robberies on the North Shore. Photo: NZ POLICE

Today, Coroner Katherine Greig opened an inquest into the 21-year-old's death at the Auckland District Court.

Mr Cerven had been in the country only five months when his life came to a tragic end.

The Slovak man had taken out a $24,000 loan and travelled to New Zealand with his girlfriend, Eva Vyrvova.

Detective Sergeant Andrew Saunders told the inquest that once here, Mr Cerven worked for construction companies and confided with friends and colleagues that he was stressed about money.

"He also told Mr McKenzie that he was in the Iraq war and he was part of the American Foreign Legion and that his knee-cap got shot while he was on a mission."

Mr Cerven said the army had refused to pay for his surgery so his mother had taken out a mortgage and he was now trying to pay her back.

When he later resigned, he told Mr McKenzie he was returning to Iraq to make more money.

"He also said that his Russian Sergeant had been sending him coded emails that he had to go to a meeting place in Seattle before going back to Iraq."

He later told a Tinder date that he had been a sniper and another that his knee had been injured in a knife fight.

Meanwhile, back at home, Mr Cerven's mother had found out about the loan and was offering to help him pay it back.

During Skype conversations, Mr Cerven told her not to talk about it to anyone.

"Mr Cerven stated that the loan was too much, quoting 30,000 euros and stating that his life was ruined."

Mr Cerven also told his mother that he had committed insurance fraud and could never return to Slovakia.

Detective Sergeant Saunders said Cerven then robbed two liquor shops and a dairy on the North Shore, armed with a knife.

The dairy robbery ended with a struggle with the owner and Mr Cerven left behind a bag with his passport and driver licence inside.

It didn't take long for the police to put out a media release with his name and photo.

He confessed to Ms Vyrvova before running away from her. In the next three hours, the couple sent over 100 texts to each other. One from Mr Cerven included this:

"Evka, every minute with you is something amazing. I am grateful to God to have a girl like you. It is no longer working."

Ms Vyrvova texted him to say she was dying of fear. Friends, Murray and Judith Steedman, were also worried.

"Judith Steedman was concerned that David might try and get the police to kill him as he was Catholic and she believed he would not commit suicide."

Mr Cerven headed to Myers Park in Auckland's CBD. He was spotted by a man walking his dog, as he paced to and fro, appearing agitated.

But it was Mr Cerven who called police - telling them he was a wanted man for armed robberies but they had the wrong man. He pleaded with them to come and get him.

Mr Saunders said police responded, the initial officers were unarmed and retreated once Mr Cerven told them he had a gun.

Armed officers told Mr Cerven to get on the ground but Mr Cerven responded by quickly bringing his hands out of his pockets.

"Officer 16 continued to move and saw a black object in Mr Cerven's right hand. According to officer 16, the black object looked like a receiver of a pistol and he believed he was about to be shot by Mr Cerven. Officer 16 then switched the safety selector on the firearm to 'fire' and pulled the trigger."

Of the eight shots fired by both officers, two hit Mr Cerven. Two others hit trees and one was found in the wall of a nearby apartment building.

The fatal shot hit a main artery in his abdomen and Mr Cerven died at the scene.

Mr Saunders said there was a criminal investigation but, after getting legal advice, no charges were laid against the officers.

Coroner Katherine Greig said she would be looking at whether Mr Cerven's death was self-inflicted and if he had provoked the police.

She will also examine the actions of the police. The police are represented at the proceedings, as are the individual officers. No lawyer is present for Mr Cerven or his family.

The inquest will reconvene in December to hear evidence from the Steedmans.