A huge viaduct going through the Manawatu Gorge is one of 13 proposals to open up the choked transit way once and for all. 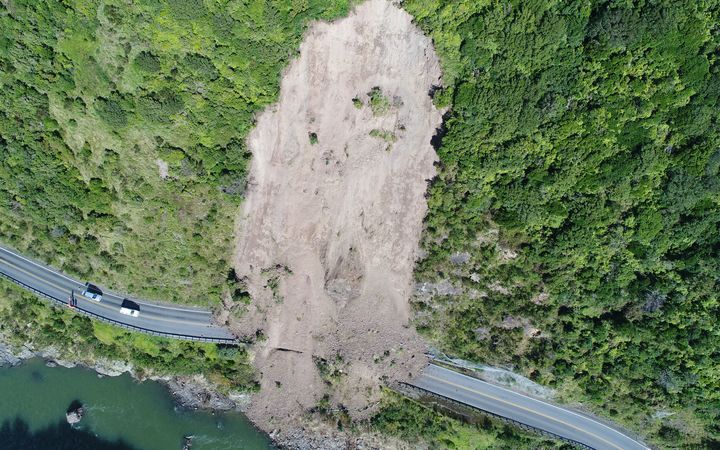 An aerial view of a slip near Woodville that closed the Manawatu Gorge. Photo: NZTA

The gorge has been blocked by several slips over the years and was closed indefinitely after a huge landslide in April proved too dangerous to fix.

The gorge carries State Highway 3 and is a vital link between the eastern and western sides of the North Island.

Its closure has forced heavy trucks and other traffic into huge detours or over narrow country lanes unfit for heavy vehicles.

If built, the viaduct would have something in common with the Otira viaduct, which opened up the frequently shut-down Arthur's Pass route to all-weather transit.

Along with the viaduct option, there are two proposals involving tunnels.

One tunnel would be 10.5 kilometres long and be slightly to the south of the gorge.

Another option would incorporate part of the existing gorge road, at the eastern end, and need a shorter tunnel, just 6km long.

Another dramatic option would be a straight road dug deep into a cutting running to the south of the gorge.

Other alternatives involve roads running though the hills to the north or to the south of the gorge.

To the south, there is a new 17km route, from Napier Road on State Highway 3 to SH2 near Woodville.

Three other routes go over the hills from one side of the divide to the other in the same area.

They are all near the existing Pahiatua Track.

Three other options involve connections built near the current Ashhurst Saddle Road, which is to the north of the existing highway through the gorge.

The last option would to upgrade the Saddle Road itself.

New Zealand Transport Agency regional transport systems manager Ross I'Anson said these options would now be presented to the people in the region.

"This is an important step towards finding the best performing option for an alternative route from the Manawatu to Hawke's Bay, with the gorge route out of action because of slips and ongoing movement," Mr l'Anson said.

"We know how keen people have been to see these options, and we've worked hard with our local partners to get to this point as quickly as possible.

"We're now keen to hear from people about the options; what they like about particular alignments, what their concerns might be and any other feedback or suggestions they can provide."

Mr I'Anson said once people had made their views known on the long list and further analysis had been completed, a short list of options would be produced by October along with cost estimates.

The final choice would be decided by December.