A Christchurch cycleway is being described as a death trap, with a cyclist left badly injured after a car turning into off-street parking hit him. 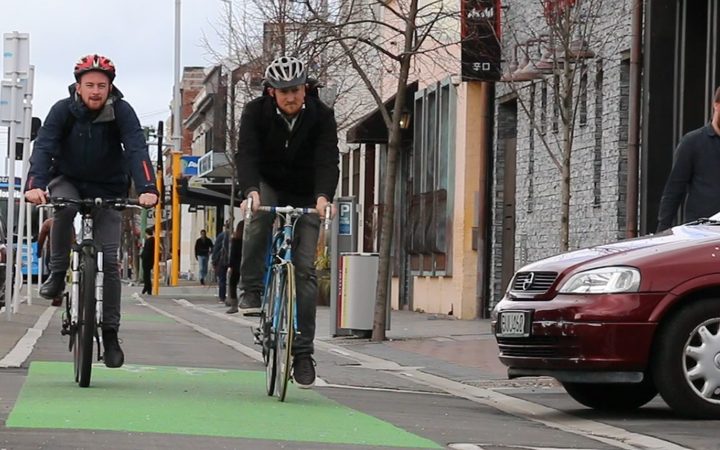 Cyclists on the St Asaph Street cycleway in central Christchurch have to watch out for cars pulling across it. Photo: Rebecca O'Sullivan

The cycleway - part of a $3.5 million redevelopment of St Asaph Street - has been open less than a year but has been plagued with problems.

Cyclists say cars parked on the roadside created a blind spot for motorists turning across the cycle lane in order to access off-street parking, preventing them from seeing cyclists coming up beside them in the cycle lane. 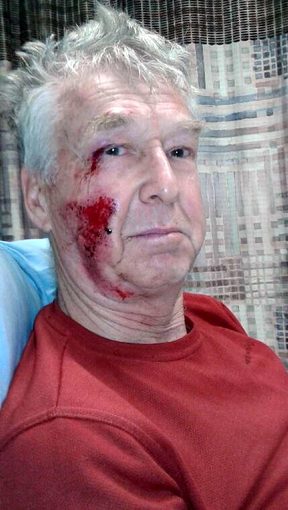 Cyclist Chris Kitson after he was knocked off his bike. Photo: Supplied

Cyclist Chris Kitson was on his way to work recently when a car going into a carpark turned across the cycleway.

He hit the side of the car and was sent flying several metres across the bonnet and onto the footpath.

"I lay there for quite a long time and I was quite wowsy and every time I tried to move I couldn't. [My] eye, it was like looking underwater ... I couldn't see through that eye at all.

"After a while I sort of propped myself up a bit and blood was going all over my jacket, my knuckles were all raw and everything hurt."

Mr Kitson was whisked away to hospital, where the enormity of what happened to him finally hit home.

"I remember [people saying] 'what happened to him?', and I was on a stretcher on my back and I actually had a bit of a blub then, just because it all hit me that here I was in hospital now and my day was not going to turn out the way I thought."

He spent the night in hospital after surgery on his thumb.

"They just were going to clean it [the wound] up because the flesh had split, [but] because the bone had gone so far back that it had torn the flesh - and they found bits of bone in there - they had to relocate."

He also had a fractured toe.

The long-time cyclist described the cycleway as a death trap, and said parked cars created a blind spot for motorists.

"There needs to be some sort of warning for cars turning in to businesses of some description.

"Electronics and things these days, they can sense cyclists coming along and there can be a little orange light that flashes, 'hey, don't turn left in a hurry here because there's a cyclist coming'. It's so easy to do. They do it on the Tuam Street cycleway for the buses coming."

Aaron Haymes, the city council's transport operations manager, admitted the cars parked alongside the cycleway did obscure the view of motorists turning across the path of the cycleway and noted the original design for the street did not have any carparking next to the cycleway.

He insisted visibility had been improved however, by the construction of road islands that prevented cars from parking too close to the entry points for carparks.

"If you turn left to go in to a vehicle entrance, it means you have to be more perpendicular to the cycle lane so that the driver gets a better view back down the cycle lane. If you didn't have those buildouts you could come in on a 45 degree angle and then that driver's visibility wouldn't be as good."

The redeveloped road was made narrower and more friendly for pedestrians and cyclists, and was originally intended to be a 30km/h zone.

Instead, it was allowed to retain its 50km/h limit, resulting in some cars travelling through the area at speeds not suited to the narrow corridor.

Mr Haymes said council staff were recommending the 30km/h limit should be brought in as originally intended.

"Then the whole traffic flow down the street would be moving at a slower speed, so people wouldn't feel as pressured as they were turning off the corridor into an entrance way.

"And of course, travelling at 30km/h, you've got time to brake and stop."

He was devastated somebody had been seriously hurt on the cycleway.

"It's the last thing we want to see on our roads that sort of thing happening. It does give our cycleways a bad name and we'll do anything we can to try to avoid these types of things happening in the future."

Mr Kitson said he would avoid the cycleway until the council made it safer.

"For as long as cars can turn in to those business carparks, I'll be off that cycleway."

He was determined to continue cycling, however.

"I'm looking forward to it. I'm a keen cyclist, I think there are so many reasons why it's good.

"I've had many accidents and this is the worst and I've had thousands of near misses. I think the more people that bike, the safer it will be for people who want to bike."