That beer or glass of wine you're offered with your haircut could be getting the chop - with the police telling several salons to cut it out. 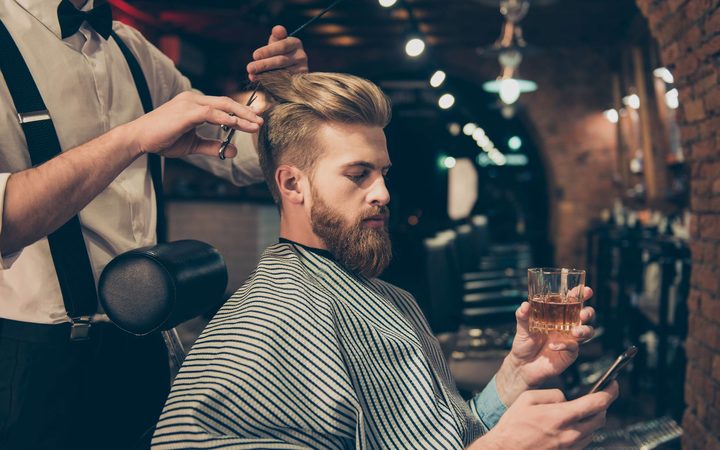 A number of barbershops have been paid a visit by police, and warned that it is illegal to give their customers alcohol because they do not have a liquor licence.

A major men's barber chain was approached in Dunedin and has been told to stop offering customers a beer when they sit in the chair.

A central Auckland hair salon owner, who did not want to be named, said it offered a complimentary glass of wine during the evening as a little bit of extra service.

"I think it's just that clients enjoy it, it's their time out. They come in from working all day and they get to sit down and they really enjoy the social aspect and just having their hair done with a glass of wine to relax with.

She said clients were only having one glass, not a whole bottle.

A central Auckland barber, who also did not want to be named, said while he sometimes offered a drink to customers in the past he had now moved his beer fridge after other barbers told him the police had been knocking on doors.

"There's quiet outrage, it's just a shame, a bloody shame.

"There must be a lot of other places that supply the occasional beer particularly in barbering and in hairdressing who will have to have a think about how to do that."

Another barber chain RNZ spoke to described the crackdown as "a bit stink".

It had been told by other shops about the recent police visits, but planned to continue offering a tipple with its trims until it received a warning itself.

Police prevention manager Inspector Paula Holt said in a statement that police were providing "guidance" to ensure shops remained within the law.

"It is an offence to promote or advertise alcohol that is free of charge. Giving away free alcohol with a haircut is not a practice that police condone, as there are host responsibility issues beyond the scope of a hairdresser that may be overlooked."

As a result some businesses stopped supplying alcohol.

"Police have no intention of pursuing this matter any further than providing guidance to business owners at this stage."

An alcohol licensing lawyer and partner at Berry Simons, Andrew Braggins, said serving alcohol had become increasingly common and it was only a matter of time before it caught the attention of the authorities.

"It is a little bit fraught in that obviously there's a lot of hairdressers and barbers out there who are gifting alcohol to their customers but ultimately they need to be a bit careful about that.

"The law... is pretty clear that premises can't be used as a place of resort for the consumption of alcohol and the police and licensing inspectors could well take a dim view of those shops and services providing alcohol free of charge.

"There are reasonably significant penalties in the Act and it's never good to be operating in breach of the law, and ultimately getting a licence so long as you're a sensible and well operated business is not particularly hard."