Deaf Action New Zealand is calling on TVNZ to provide interpreters at its political debates, saying the current subtitles are not adequate. 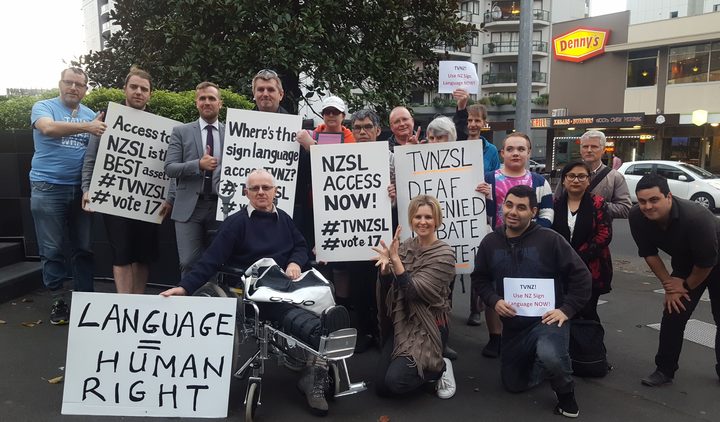 About 20 people protested outside TVNZ's Auckland office tonight ahead of its minor party leaders debate.

Deaf Action New Zealand spokesman Kim Robertson said deaf people needed interpreters in order to get a sense of the emotion and feeling of the debate.

"Sign language has its own dramatic structure, we use a lot of facial expressions to get the idea of how things are being said with subtitles you just don't get that.

"We've been asking for interpreters for the last 15 years- we want to have clear access to what is going on, as tax-payers it is our right," Mr Robertson said.

"TVNZ said they are in talks with the Human Rights Commission but we are tired of hearing the same old excuse, the time for change is now."

TVNZ said it respects the status of sign language as an official language of New Zealand.

"All four of TVNZ's live debates will carry live captioning, we recognise that around 20,000 New Zealanders use sign language and would prefer to see an interpreter rather than on screen captions.

"We have focused on captioning as a viable solution to meet the needs of the greatest number of deaf and hearing impaired viewers, which number in the hundreds of thousands, unfortunately, for logistical reasons, we are not set up to accommodate an interpreter in our live news presentation so sign language won't be incorporated into our televised debates," TVNZ said in a statement.