An investigation is under way into the cause of a fire in a high-rise building in Wellington's CBD, which forced the evacuation of dozens of people.

Police said the 14-storey office block on Victoria Street, at the corner with Willeston Street, was evacuated this morning and it appeared no one was injured or missing.

Thick black smoke could earlier be seen billowing from the building. The area was cordoned off and police asked people to stay away from the area around Hunter Street and Willeston Street.

Looks like a full on fire onVictoria Steet Wellington. Hope people getting out ok. pic.twitter.com/ELYXP6lZ7J

Coco Chen, who owns a bar at the base of the affected building, estimated 50 to 100 people would have been evacuated.

She was at work when she was told to leave, she said.

"A lot of black smoke come out and then the fire alarm was on so I had to check and then I saw everyone looking up, pretty scared, so I had to ... evacuate.

"We just dropped everything in the bar and then came out."

Fire and Emergency said the fire broke out in air conditioning unit on the roof and appeared to be confined to the unit.

Though there was a lot of smoke, and there was potential for more damage, in the end the fire was quite small, he said. 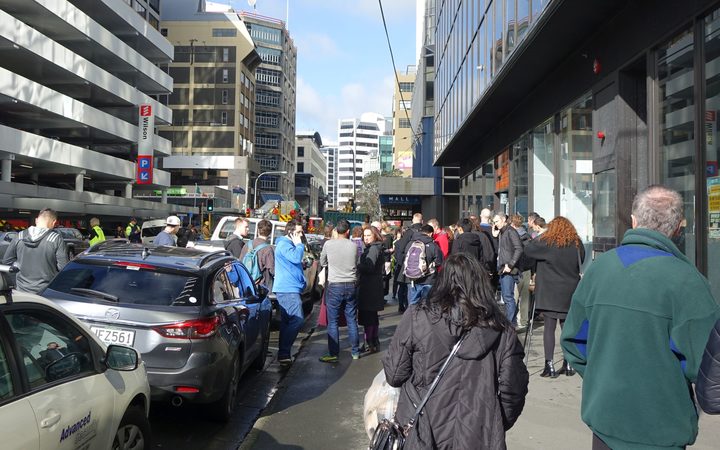 Scores of people were evacuated from the building. Photo: RNZ / Emile Donovan

An evacuated office worker, David, said he emerged from the building to see thick black smoke pouring off the roof.

"The alarm went off and then our fire warden, fortunately, went around and said 'hey, this is a genuine fire - you do need to get out'.

"When we got out and saw the billowing smoke we thought, wow, this is the real deal. It was black, billowing smoke from the top floor, so it looked like there was a significant fire."