A Christchurch family has been left shaken but otherwise unharmed after a slip pushed a garage on top of their house. 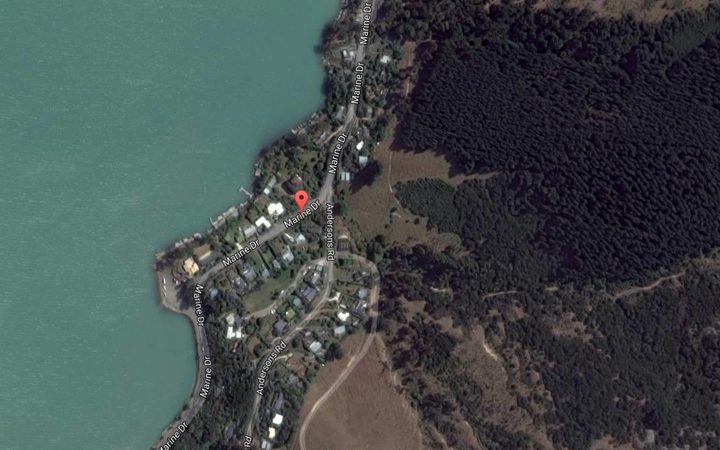 The Marine Drive slip went through the back of a house but missed the bedrooms. Photo: Google Maps

Emergency services were called to the slip on Marine Drive in Charteris Bay at around 6am today.

The deputy chief fire officer for Diamond Harbour, Barry Craw, said it followed two or three days of non-stop rain and had left about half of one side of the road completely missing.

"Our main concern was for the occupants of the house and we made contact with them, they were out of the house at the time, they had gotten themselves out. They were very shaken and quite distressed and wet because it was raining pretty heavily."

He said the slip had taken with it a set of double garages that had originally been resting on poles by the road.

"They've landed onto the roof of one end of the house and the slip has gone through the back of the house and has completely crushed the dining room and kitchen area of the house. So luckily the sleeping compartments, bedrooms, were left untouched."

He said several large rocks and a "considerable amount of mud" had come down the steep bank.

"It could have been a very different story."

He said luckily nobody had been hurt and while there were several houses further down the slip had run down the side.

As for the road, he said the Christchurch City Council had sent in contractors to assess and the local lines company was on the scene with a power pole left hanging by its wires.

"I'd imagine there'll be several weeks worth of rebuilding retaining walls. There's a sheer drop in the middle of the road of about 15 feet or so where the slips gouged out."

A diversion is in place.