The Defence Force stands by the findings of its official investigation but accepts friendly fire may have played a bigger role in a deadly firefight in Afghanistan in 2012.

Two New Zealanders and four Afghans were killed in the Battle of Baghak, the subject of a Stuff documentary series The Valley, in which Afghan soldiers cast doubt on the Court of Inquiry conclusion that most casualties were from insurgents. 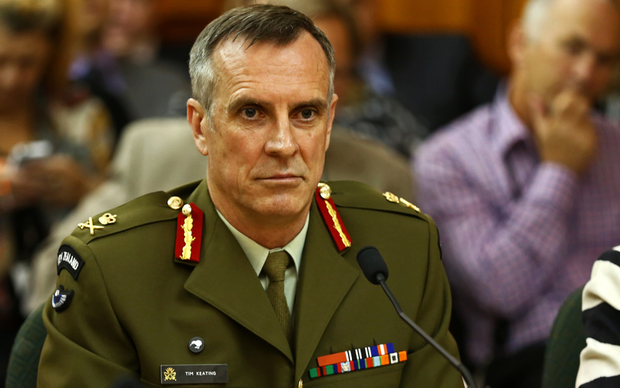 Defence Force chief Lieutenant General Tim Keating said he did not grant the journalists an interview for the series because he did not trust them to give a balanced account. Photo: RNZ / Alexander Robertson

In a 34-page response released yesterday, the Defence Force said the possibility that Afghans and New Zealanders had fired at each other could not be excluded and there were "alternate possibilities".

However, it stood by the Court of Inquiry, which relied on "the balance of probability".

"The NZDF has always acknowledged the caveats created from this being an operational theatre, which included not being able to visit the site, and not being able to speak to the NDS [Afghan National Directorate of Security]. The Court of Inquiry is our best endeavour at explaining events, but [...] there is a lot of variables not known."

No-one had been held accountable for the events that day because it was not the role of the Court of Inquiry to determine guilt, the statement said.

"The NZDF does not believe it appropriate to second-guess the decisions made by a commander in the field, judging the decisions they made through the lens of 20-20 hindsight."

Defence Force chief Lieutenant General Tim Keating said he did not grant the journalists an interview for the series because he did not trust them to give a balanced account.

"Stuff Circuit might not like our answers, or be satisfied that they can't see information that led to NZDF's conclusions, for example contained as evidence in the Court of Inquiry, but these are NZDF's positions nonetheless.

"Stuff Circuit and the NZDF, found themselves in positions each lacking trust in the other.

"The Stuff Circuit made it abundantly clear that they didn't believe the Court of Inquiry and the version of events and answers provided by the NZDF: they didn't trust us.

"And the NZDF, consequently, didn't believe the Stuff Circuit would give NZDF's information a due consideration."

Regarding allegations in the documentary about the 2004 firefight in which Willie Apiata earned his Victoria Cross, Mr Keating said he was gathering information about that incident and would respond later.

"This event took place 13 years ago, and we are taking time to gather all the facts, after which we will publicly respond," he said.

According to Afghan villagers in the documentary, the troopers had returned the next day with bodies of the dead fighters on the front of their vehicles.