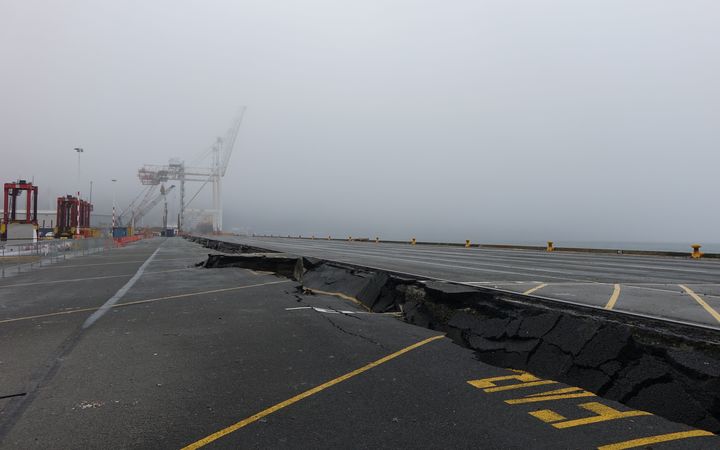 Damage at the port, soon after the November quake. Photo: RNZ / Michael Cropp

The port was badly hit in November's quake, which caused land to subside or collapse into the sea, and put its container terminal out of action.

It expects to spend a further $170 million in the years after that.

The statement said business interruption insurance would cover the loss of profit from the container sector and rental income from its investment properties, including Statistics House and BNZ.

The insurance cover is in place until November 2019.

Centreport made an allowance for $400 million of insurance money, according to its Statement of Intent earlier this year.

The port forecast it would spend about $23 million in the next three years in a bid to make the liquefaction-prone reclaimed land more resilient.

That would be on top of the $20 million of temporary repairs to get the ship-to-shore gantry cranes back in operation.

WRC Holding Company's statement said the immediate focus had been restoring operational capability at the port.

"The Harbour Quays investment properties were also damaged in the earthquake and CentrePort continues to work with its engineer sand insurance assessors to determine the extent of the damage.

"The longer term plan to repair or reinstate the port infrastructure, damage to the land, and investment properties will commence once damage assessment reports are complete. The long term recovery plan and strategy will be widely consulted on with stakeholders."

The timing and completion of many repairs is still unknown.

The Lyttelton Port received an insurance settlement of about $450 million following the Canterbury earthquakes.