A mining company that has found outstanding quality gold near Paeroa could face a battle to mine it commercially. 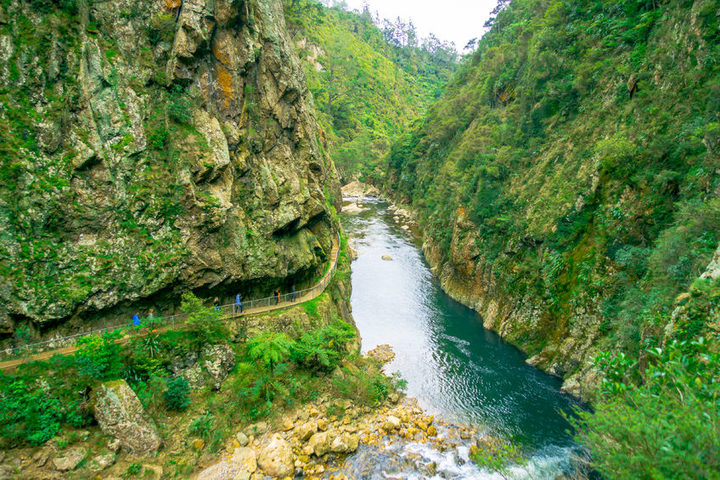 New Talisman Gold Mines has been prospecting at Karangahake Gorge and has found over 300,000 ounces of high quality gold at one of its sites called Dubbo.

"We've been prospecting and analysing a lot of historic data which provides evidence that the deposit extends far below where we are now and it... [is] excellent gold grades," he said.

Mr Chowles said they were also looking at five other zones, which they hoped would have similar gold levels.

But Hauraki District Council mayor John Tregidga said they had known there had been quality gold there for a long time.

"I'm not surprised because we've known that for many, many years that there is quite significant resources in there left behind by the mining days," he said.

"What they're [New Talisman Gold Mines] doing here is just proving that."

Mr Tregidga said New Talisman Gold Mines had consents for bulk sampling at the gorge, which allowed them to take 20,000 cubic metres of ore each year.

He said that was not commercial mining, and there would be a lot of opposition from the community if the company were to do so.

Mr Tregidga said although the company had a 25 year mining permit, they would need a resource consent from the Hauraki District Council and the Waikato Regional Council before they could mine commercially.

Green party MP Catherine Delahunty said community groups around the country, not just in Karangahake, were strongly opposed to any extracting of resources on conservation land.

"It's [New Talisman Gold Mines] a small company that is pretty desperate to get some more investors so they're spinning the story as the greatest thing that's ever happened without mentioning the absolute national opposition to mining on conservation land," she said.

"Really bulk sampling is mining and it should not be happening."

Protect Karangahake, a group formed against New Talisman Gold Mines, has been protesting against all mining in the area.

The group's chairman, Duncan Shearer, said locals were already having to share some tracks with security guards and trucks carrying supplies.

He said it was vital that the area, which is special to many people, be protected.

"We see no benefit to our local community who are gaining jobs and economic employment from tourism activities now," he said.

"They're all put at risk by mining operations which the enjoyment of those very tourists, so we see no place in Karangahake for mining."

Mr Chowles said while some locals are unhappy with their plans to extract gold, they've also had positive responses from many people.