Homeowners in Matata say they have been threatened by their local council to accept "lowball" buyout offers or face being forced out. 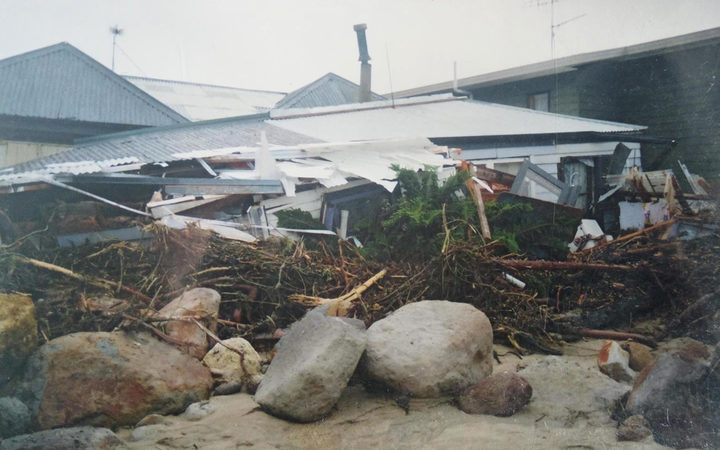 Homes in Matata were destroyed by flooding and debris in 2005. Photo: Supplied / Michele Beach

Dozens of buildings in Matata were badly damaged in May 2005 when torrential rain washed boulders, logs and other debris down a flooded stream.

The Whakatane District Council said it would mitigate the risk of a future event and allowed residents to rebuild, but it now says that won't be possible and it wants to acquire 34 properties.

"We're being told if we don't take the 'voluntary' retreat plan that they're offering, that they're going to take it to a higher level where they could have us forced off our land with no compensation," said Wayne Irwin, who bought his Matata home in 2009.

Rick Whalley said he was told the same thing.

"[The Council] says, 'We'll be the nice guy, and we'll offer you this money for your house,' or the Regional Council has the power to take it away from you for nothing."

Whakatane Mayor Tony Bonne said he was "floored" by the allegations.

"If a Council staffer has done that, [residents] need to formally put that in writing. That is not what our council is wanting to achieve," Mr Bonne said.

He has been offered $280,000 because, now that the Council cannot mitigate future risks as it said it would, anyone living in his home is deemed to be at risk of dying.

A July 2015 report to the Whakatane District Council's Policy Committee said it has "no legal obligation to compensate landowners for loss of property values".

The report repeatedly expresses concerns the Council will not have enough money to buyout Matata homeowners: "The need for funding assistance from other government agencies is apparent."

Mr Bonne said his Council had approached the government to ask for help.

"Anne Tolley has got around the table and got officials to listen to the idea, there is no promise from anybody but there is cooperation that we have to do something."

"How do they think they can just come in, make ridiculous offers, and expect you to pack your bags and walk away happy, it's just not going to happen," Mr Wilkins said.

"At the end of the day they gave assurances way back they would control the issues and told us to go ahead and build our homes and live happily ever after, and they haven't done that.

"These are people in their 70's… [my neighbour's father] passed away last year and he should've spent the last ten years of his life fishing at the beach but he wasn't, and that's down to the local council."

Mr Bonne said he "feels for the residents" and his Council was doing everything it could.