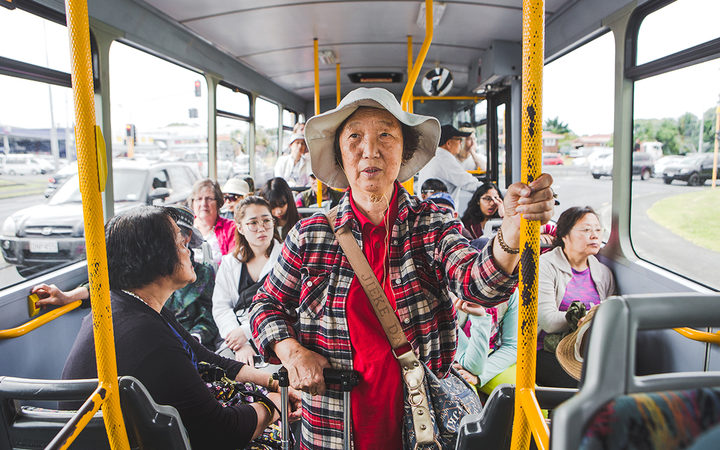 A new documentary called East Meets East looks into their hardships, following the journey of a 79-year-old woman, Fang Ruzhen, who has lived here for 15 years.

Every Friday morning she takes the bus to get to the Asian supermarkets in East Auckland where she meets many of her fellow Chinese seniors shopping for ingredients to make traditional dishes for their families.

Mrs Fang said she liked living here but it was hard to talk to locals.

"We don't usually have too much contact with other New Zealanders because we can't speak English," she said (translated from Mandarin).

"If we meet them, we just say hello, ni hao and that's it, we don't really talk."

Mrs Fang said she wanted to learn English but it was hard for her at her age and she often forgot what she had learned.

Julie Zhu, the director of the documentary, said there was a lot of public opinion that suggested elderly immigrants should brush up on their English or go back to China.

"I think it's just a very easy thing to say without acknowledging their [New Zealanders'] own privilege and living in a country ... that has been colonised," she said.

"What about all the British people who first came who didn't learn Māori? They should go back to Britain? It's just a very xenophobic thing to say."

Ms Zhu said while many New Zealanders enjoyed aspects of the Chinese culture such as its festivals, not many made the effort to get to know the people who brought those traditions to the country.

"We think of those cultural festivals, like the Lantern Festival, where that culture is put on show for one day and we'll celebrate the food, the dance and the entertainment, but we don't celebrate these people in our everyday lives," she said.

"We see them as a drain on our society and something we don't want to show at the centre of anything."

We headed to the Asian supermarkets yesterday. Good thing the rain couldn't get in! #BTS pic.twitter.com/urohLhefGy

The Wellington-based Chinese Senior Community Trust said many elderly Chinese left behind everything they knew to come here and be with their children.

The trust's chairman, Tom Kong, said it was very hard for them to not only learn a new language but a new way of life.

"Until you contact them or keep in touch with them and know their life, I think there is still a barrier between the local people and the new immigrants," he said.

The Chinese New Settlers Trust in Auckland said because of their inability to speak English many older people had now built their own Asian community.

Cathy Li from the trust said in their own way, they had created a life for themselves here.

"Most of them still work with their Chinese people but with help from their children and also with the help of our organization, we help them to settle down," she said.

The latest census figures show about 17,000 Chinese people over 65 years old were living in the country in 2013, a number that is expected to increase more than four times by 2038.

With those projections, Ms Zhu said it was even more important that New Zealanders took the time to get to know what she called a marginalised group.

East Meets East is being screened at the New Zealand International Film Festival - playing before screenings of Abacus: Small Enough To Jail - and will go online next month as part of a national documentary competition known as Loading Docs.