Members of the public will get the chance to go on board Sir Peter Blake's boat over the next few days as it returns to New Zealand for the first time in 16 years.

Sir Peter, 53, was shot and killed on Seamaster by pirates on the Amazon River in late 2001, while on an expedition to raise environmental awareness for at-risk regions.

Now named Tara, the boat made its way to the Auckland Viaduct early this afternoon.

"New Zealanders are full of anticipation about Tara coming home for the first time in 16 years," she said.

"It's a reminder of both exciting times - that Sir Peter Blake was heading off on one of the biggest adventures of his life - but also tinged with sadness that he wasn't able to complete his mission."

She said it was exciting that Team New Zealand and the America's Cup would also be returning to the country around the same time. 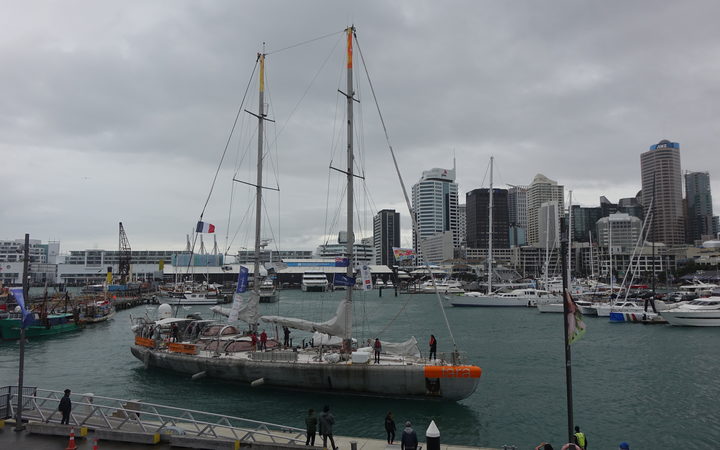 The two-masted schooner - pictured in Auckland - is on its way to a coral reef study in the Pacific. Photo: RNZ / Jessie Chiang

Tara will be open to the public before it sails off to continue a coral reef study in the Pacific.

Sir Peter, who was knighted in 1995, was one of this country's most celebrated yachtsmen.

As well as winning the Whitbread Round the World Race and Jules Verne Trophy, he was part of the team that won the America's Cup with 'Black Magic' in 1995 - and successfully defended it during the next series.

His lucky red socks - given to him by his wife, Lady Pippa, and worn during the 1995 campaign - have become a symbol of support for Team New Zealand.

Sir Peter's former expedition vessel is a two-masted schooner that now sails under a French flag.

Its former skipper described it as an "extraordinary vessel, built to go anywhere there is 1.5-2m of water". He and his crew had started a five-year journey on it when he was killed.