A Whangarei woman forced to live in a leaky bus as she recovered from surgery is now safe and warm in a local motel.

Maureen, 61, had a hip replacement two weeks ago, and has been unable to find an affordable flat in the city.

The Labour MP for Te Tai Tokerau, Kelvin Davis, has arranged for Maureen to move into a local motel, paid for by Work and Income, for at least a week.

He said his staff were investigating whether she was getting all her benefit entitlements, and have had an offer of a studio unit for her in Whangarei from a local councillor.

Maureen said she was overwhelmed with the kindness people had shown her - and though she was grateful for the bus she was glad to be out of it.

Since RNZ told Maureen's story this morning, people have been calling from around the north, offering her a place to live. 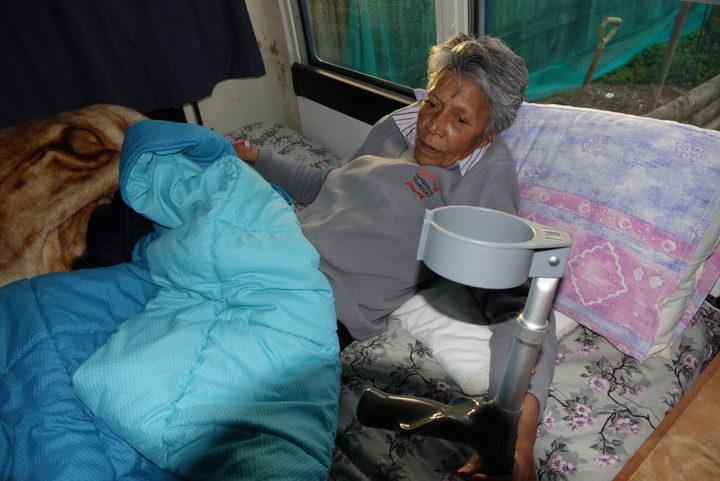 Maureen is living in a bus in a friend's backyard in Whangarei, having had a hip replacement just two weeks ago. Photo: RNZ / Lois Williams

Maureen, who asked RNZ not to use her surname, moved to the city from Auckland after the company she worked for as a truck driver closed and she was made redundant.

She thought she would be able to find a place she could afford on a benefit, but the rental prices for suitable units - which she said turned out to be about $300 a week - came as a shock.

Maureen stayed with friends and family for a time but, increasingly desperate to be independent, she found the bus - and a friend who let her park it.

A fortnight after her surgery, she is still in pain and moving with difficulty. Her doctor said it would be difficult for her to recover living in a cramped environment and she was more at risk of respiratory conditions and pneumonia because of the cold and damp.