A court has ruled the Department of Conservation (DOC) does not have the authority to grant shark-cage diving permits. 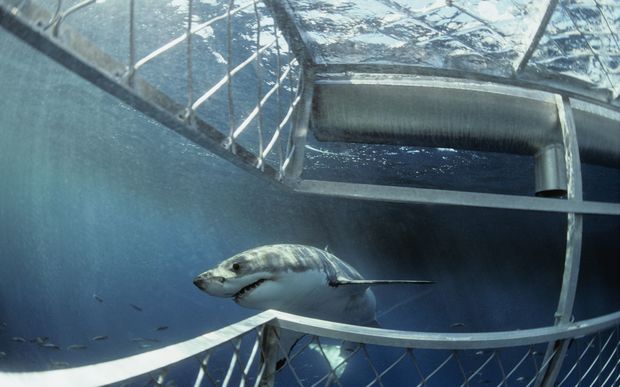 A file photo from a shark cage: Other divers fear the practice encourages the predators to hunt for food around their boats. Photo: Biosphoto / Jeffrey Rotman

DOC began issuing permits in 2014 to two Stewart Island shark-cage operators under a section of the Wildlife Act. Before that, the activity was unregulated.

It came after concerns the practice of sending out bait from boats to attract the predators was encouraging great white sharks to hunt for food around divers' boats.

About 100 great whites travel to the Foveaux Strait area each year between December and June to feed off a large colony of fur seals.

A High Court decision from Justice Karen Clark, released today, ruled the Wildlife Act did not give DOC the power to regulate the activity.

But she did not say which act should now govern shark-cage diving, or whether it should be regulated at all.

DOC and industry groups said they were consulting with lawyers to understand the implications of Justice Clark's decision.

'It's back to the drawing board' for DOC - paua industry

Paua Industry Council spokesman Storm Stanley said he was "underwhelmed" by the decision, but it was good to get clarification on the issue.

He said shark-cage diving fell into a legislative gap and it was not clear now which authority should regulate it.

"DOC's done their best to make it fit the Wildlife Act and Justice Clark's said 'no that doesn't work' so I guess it's back to the drawing board."

Mr Stanley said DOC would need to decide if it wanted to appeal the court's decision, or accept it, which would leave a "wild west" scenario for shark-cage divers to operate in.

However, he said he did not anticipate the industry would be left unregulated.

In her decision, Justice Clark said shark-cage diving had been operating in Stewart Island waters since 2008 without appropriate controls.

In 2013, an industry group of paua divers, PauaMAC5, called for DOC to regulate it, saying it posed a safety risk to paua divers and operators were "pursuing" and "disturbing" the sharks - contravening the act.

In 2014, the then-Minister of Conservation Nick Smith announced that any commercial shark-cage diving operations would need DOC-issued permits.

PauaMAC5 supported the move, but said any permits should include a condition prohibiting use of shark attractants.

In 2015, it took court action against DOC, arguing shark-cage operators had breached the conditions of their permits.

It said it wanted DOC to issue a declaration that it must consider the safety of other water users when licensing for great white shark-cage diving.

DOC had refused to include permit conditions governing public safety, arguing it was outside its obligations under the Wildlife Act.

The act specifies DOC may from time to time authorise any person to "catch alive or kill for any purpose" any protected wildlife.

However, when the case came to court in 2016, a judge questioned whether DOC actually had the power to authorise shark-cage diving, as the activity did not involve catching or killing sharks.

DOC did not issue any permits for the 2016 shark cage diving season.

Operators said their livelihoods depended on operating, and they had no choice but to risk taking clients out without permits.